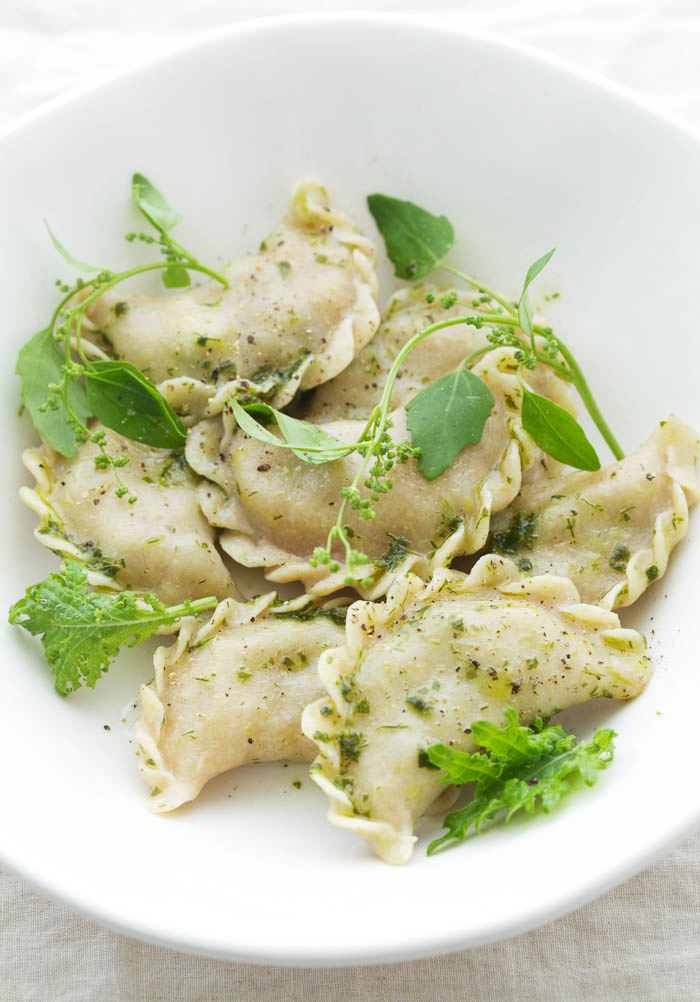 If you think about it, pretty much every culture has some kind of dumplings in its food repertoire. Russians are not an exception and our pelmeni and vareniki are some of the most characteristic dishes of Russian cuisine. Russian dumplings are not just any food, as they often involve a family ritual. 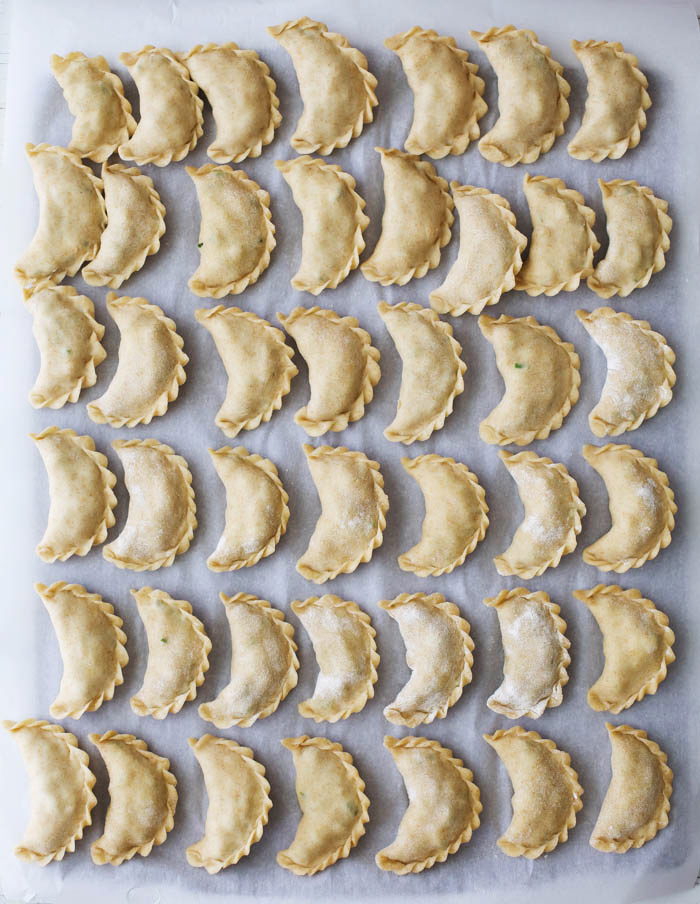 Historically, kitchen duties in Russian households have been women’s almost exclusively. Our culture has been such where a woman cooks, raises children, keeps the house, while often working just as many hours as the man. Thankfully, all that has been changing. In many traditional families, however, when it was time to make dumplings, men would make and exception and participate in the crafting of them. Every family member was usually delegated a specific job – making the filling and the dough, cutting the dough and preparing it for rolling, rolling itself, distributing of the filling and, finally, shaping the dumplings. This way, the entire family could make a couple of hundreds of dumplings in just couple a of hours, freeze them and have them handy for several weeks to come. 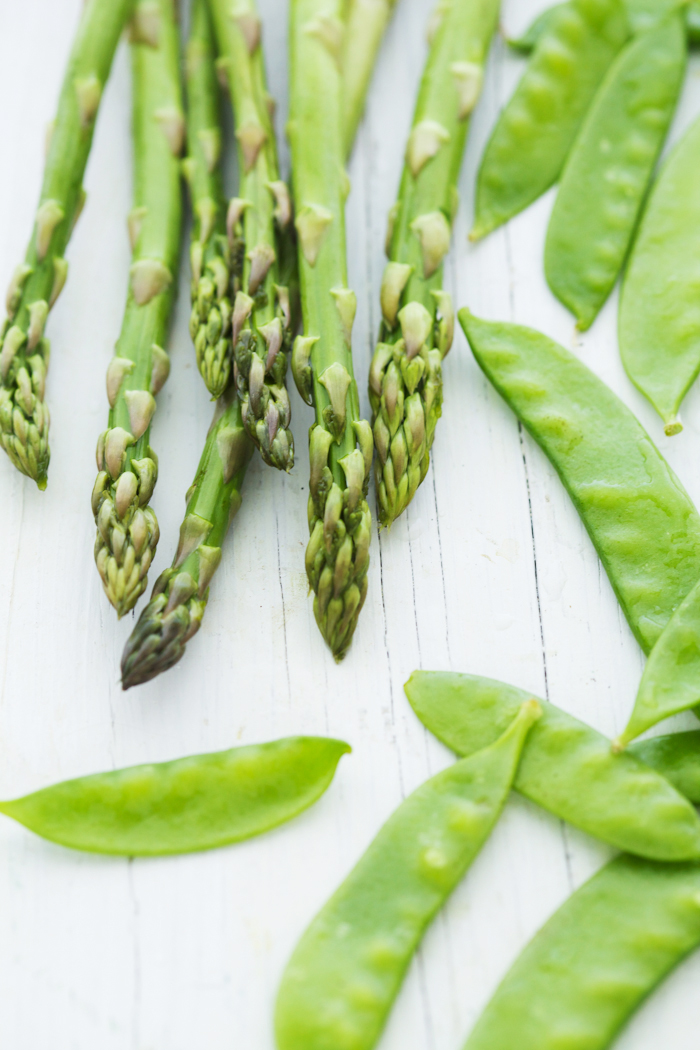 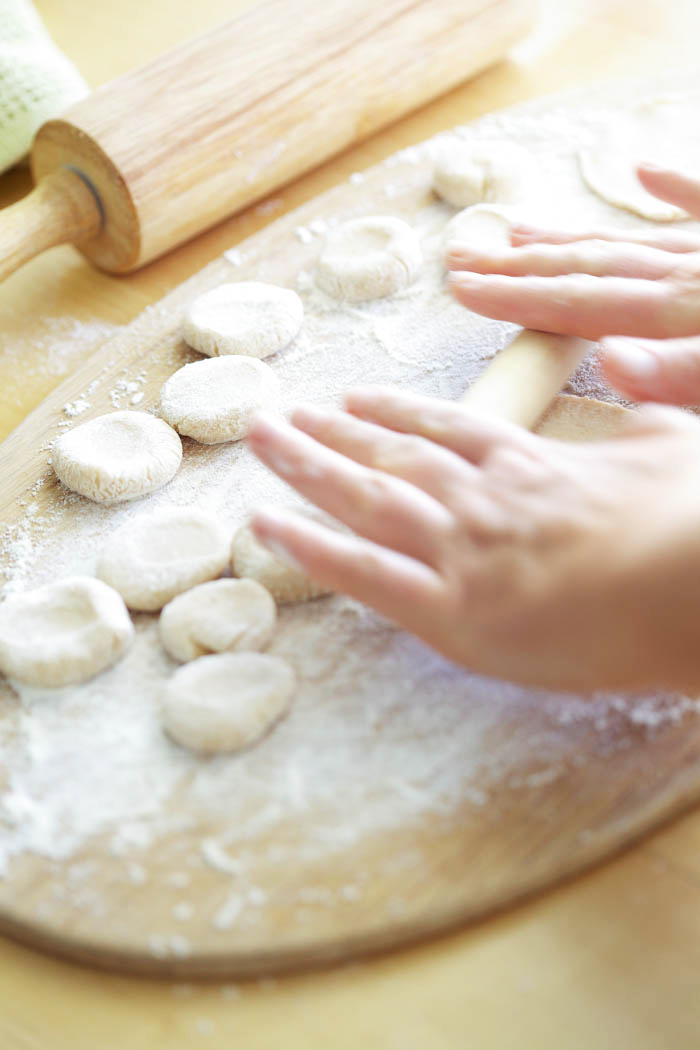 In cold winters, back when refrigeration wasn’t an option, dumplings were stored in pillow cases hanging out of windows. They are also a very economical dish, as you can feed a lot of people using less ingredients as a stuffing – meat, potatoes, farmers cheese, etc. Originally, that was one of the reasons for dumplings becoming so popular, when food was in deficit. 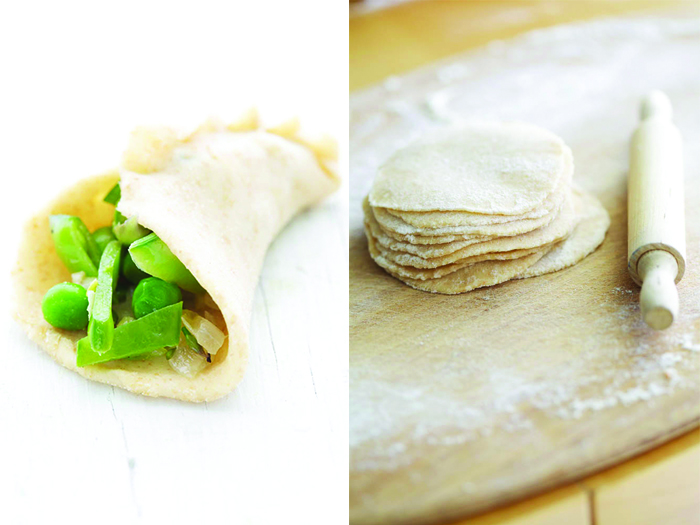 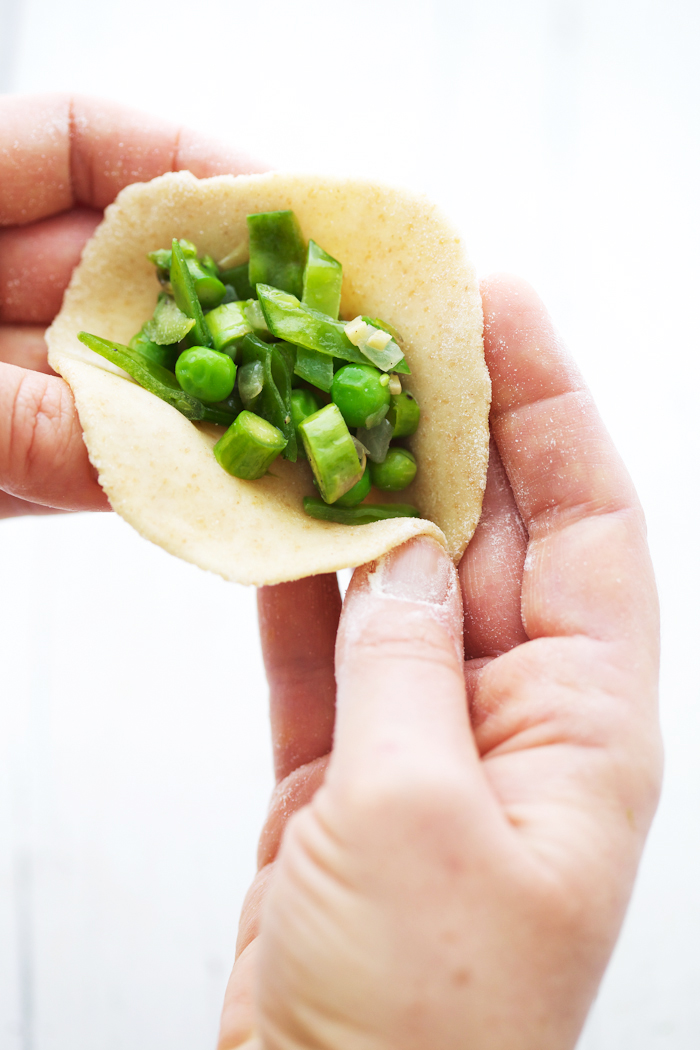 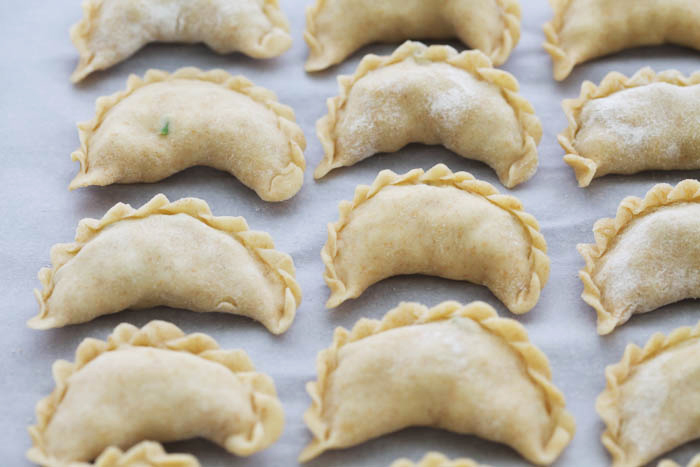 The only traditionally Russian thing left in the vareniki that I share with you today is the way I crafted them with the pinches around the edges. I made the dough vegan and with spelt flour instead of wheat. And the filling is very green and light to celebrate spring.
We are in Russia and having a great time catching up with friends and family. Enjoy and until next time. 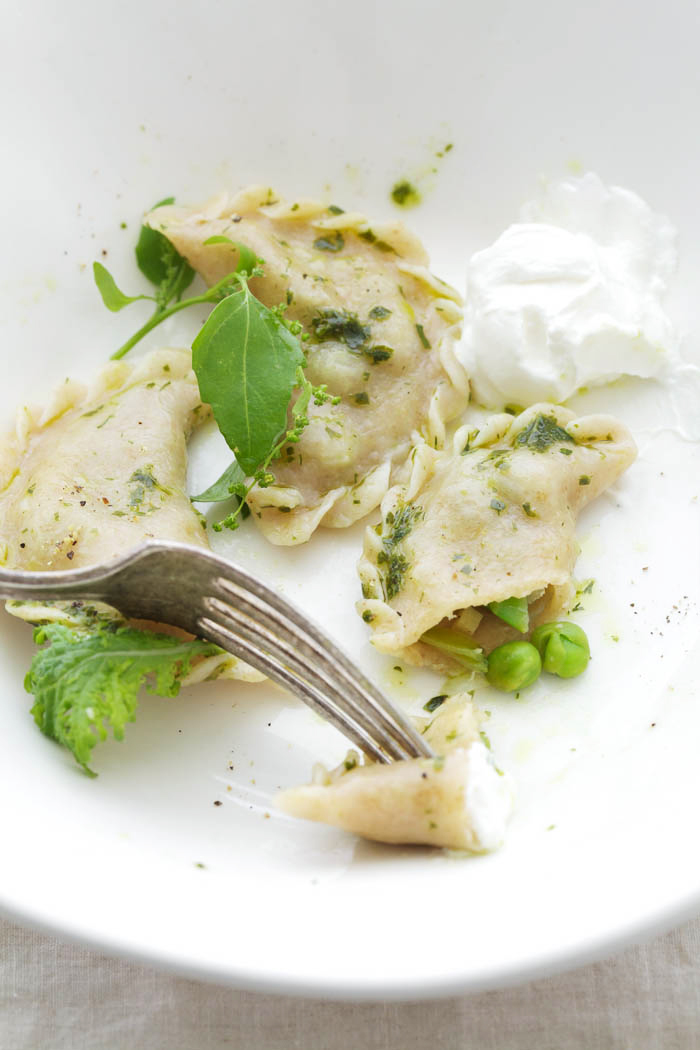 to make the dough
1. Combine flours with the salt in a large mixing bowl. Add oil and work it in with your hands.
2. Slowly pour boiling water in, stirring.  Knead into a soft dough, cover and let rest while making the filling.

to make the filling
1. Warm the oil in a large pan over medium heat. Add shallots, ginger and garlic, sauté for 4 minutes.
2. Add in asparagus, snow peas and green peas, sauté until vegetables are bright green, for about 4-5 minutes. Add salt and lemon juice, remove from heat. Let cool.

to make the vareniki
1. Flour your working surface with the light spelt flour. Cut one medium-sized piece from the dough at a time and roll between your hands into a rope of an even thickness.
2. Cut the rope into small pieces. Roll each piece in the flour and press into a round disk with the palm of your hand.
3. Roll each disc into a 1/8-inch thick dumpling skin. Add the basil into the filling if using.
4. Fill each skin with a small amount of filling. Pinch both edges together to enclose the filling (make sure that they sticks together securely – that’s why we use the pinched-out seal pictured in photos). Lay the finished dumplings on a parchment paper covered tray.
5. Repeat with the rest of  the dough and filling. Cook the vareniki immediately or freeze. Transfer into large ziplock bags once hard and keep frozen until ready to use, within one month.
6. To cook the vareniki, bring a large pot of salted water to a boil. Add in the vareniki and gently stir to make sure that they’re not sticking to the bottom of the pot. Boil for 3-4 minutes. Remove with a slotted spoon. Add ghee or any mild tasting oil. Serve with your favorite pesto, chimichurri or the traditional Russian way – with sour cream (good plain yogurt will work as well).

Note: Alternatively, you can divide all the dough into two portions and roll one portion at a time to be 1/8 inch thick. Then cut out uniform skins using a glass or cookie cutter. Re-shape, re-roll and re-cut the scraps until all the dough is used up. Keep the skins covered.