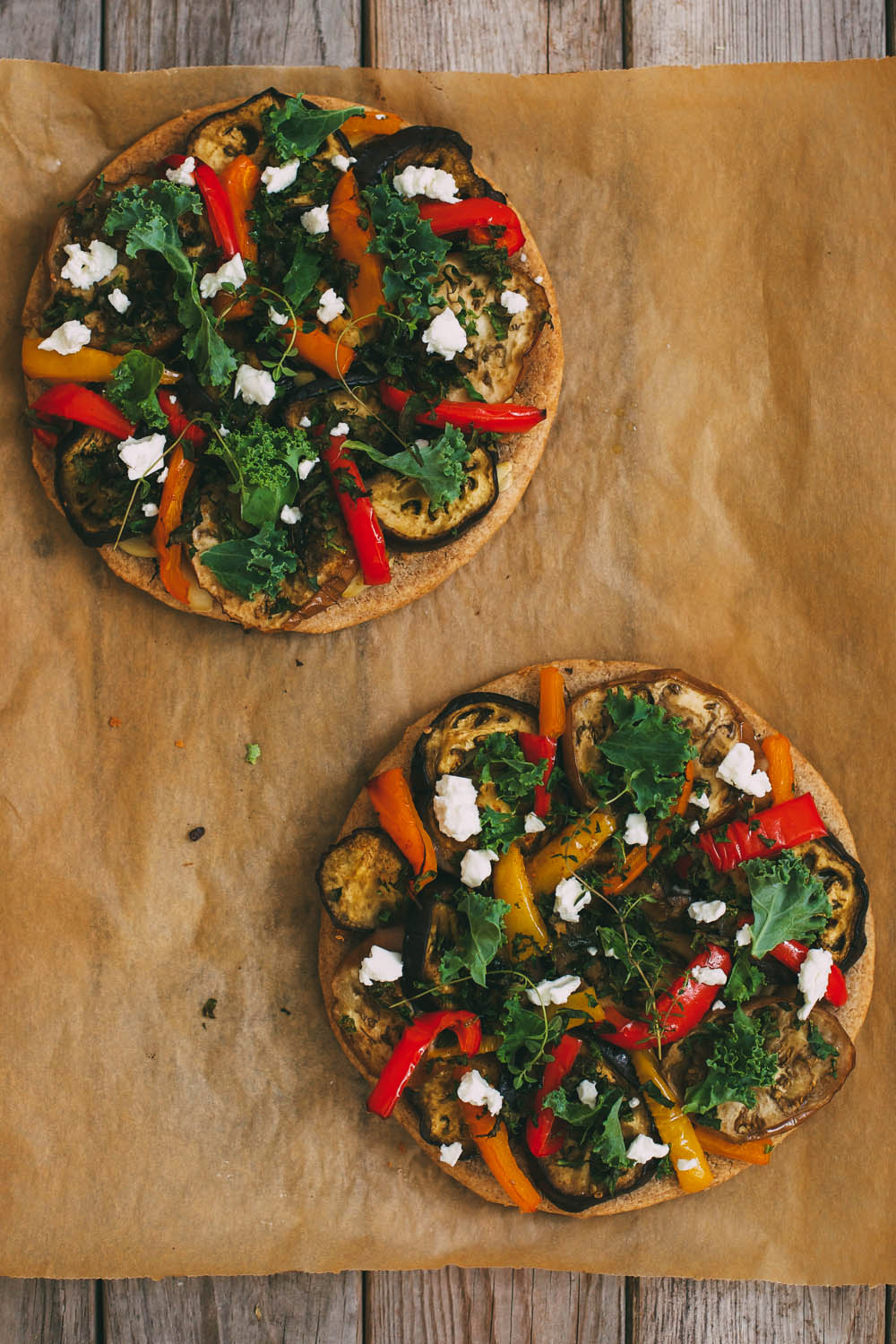 I’m leaving for Italy in a few days. Aside from a few beautiful places, I’ll be traveling to the region of Abruzzo, fairly unknown to tourists, and staying in a medieval village in the mountains. Along with feeling excited, I’m also a little nervous about my lack of experience driving on mountain roads and my non-existent knowledge of the Italian language. I predict I will be tasting some amazing pizza very soon, but for now, here is one of my favorites that I make at home. 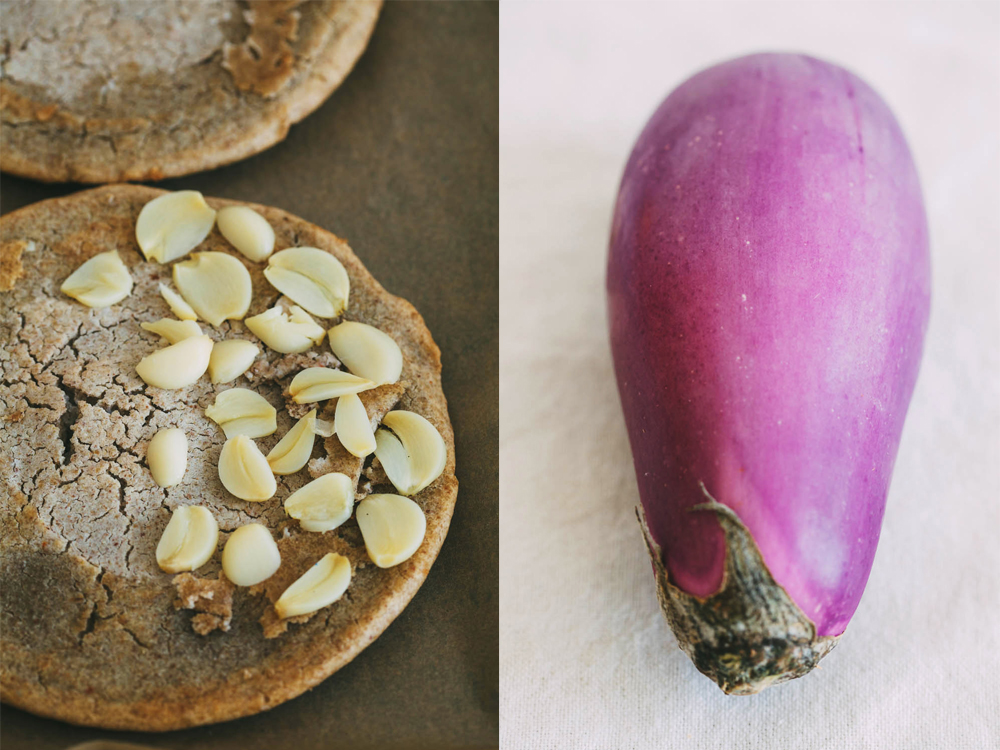 I’ve been making roasted eggplant and bell pepper pizza with all kinds of different crusts as long as I’ve been cooking vegetarian – it’s such a winner of a dish. It all began with a traditional wheat-based crust that was later replaced with my favorite sprouted flatbread. As delicious as the sprouted crust is, the process is very involved. When I saw Laura’s recipe for a simple, gluten-free pizza crust, I had to give it a try. I chose to use buckwheat groats instead of quinoa/millet because I love the taste and texture of buckwheat, which does not need to be soaked for 8 hours like most grains do – the groats become soft after just an hour of soaking.
As for the toppings, I’ve had several occasions when I fed this pizza to eggplant skeptics, who were converted right there and then. 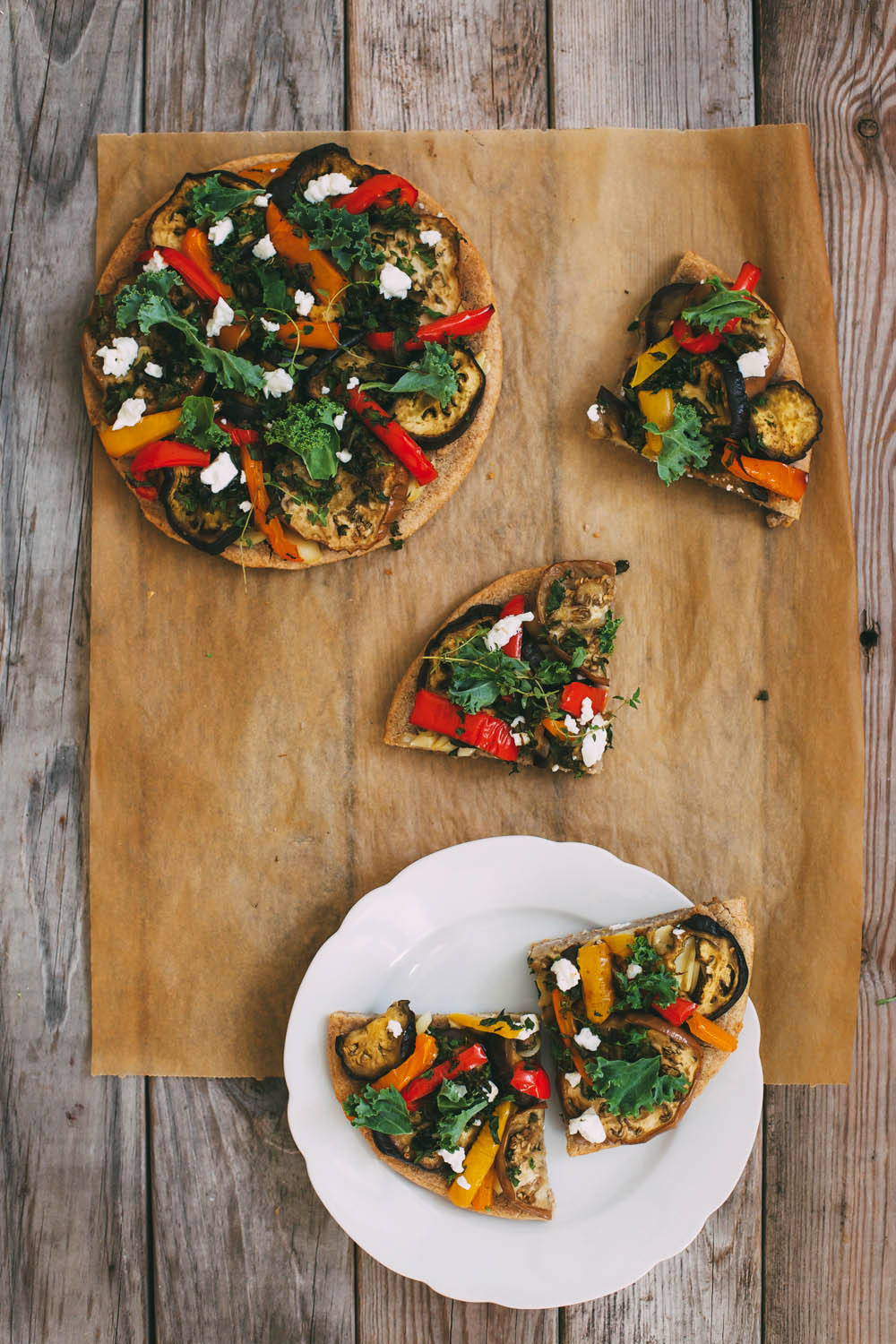 In other news, our cookbook is now out in French! Visit here to learn more. 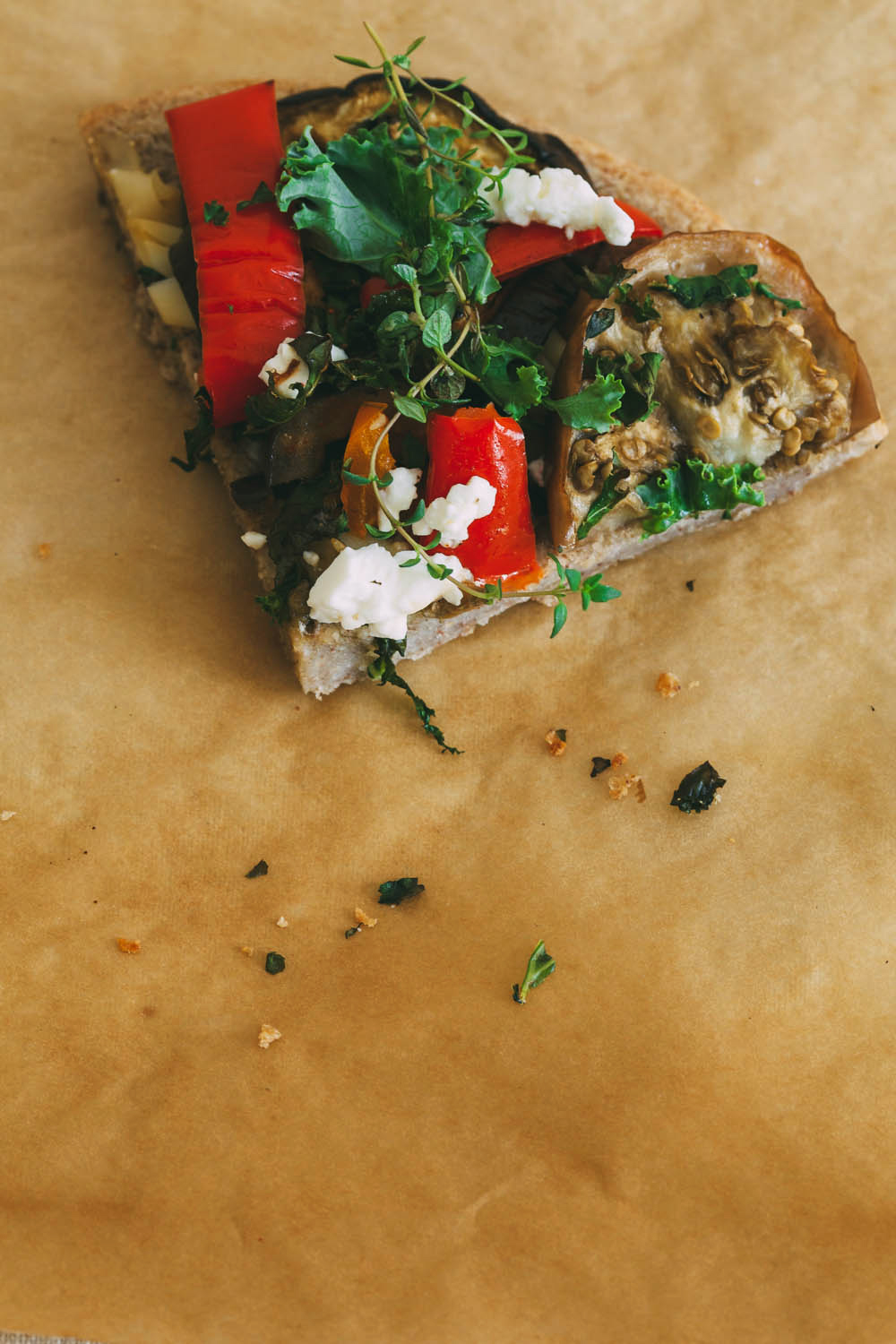 to prepare the toppings
1. Preheat oven to 400 F
2. Cut the very top of the garlic head off to expose the insides. Drizzle with olive oil, salt and pepper and wrap in foil or parchment paper.
3. Mix olive oil and chili powder to taste. Place eggplant slices and pepper chunks into a large baking dish and brush with the chili oil.
4. Place both the garlic and vegetables into the oven, roast for about 20 minutes or until soft. Set aside.

to make the crusts
1. Preheat oven to 450 F
2. Rinse the buckwheat groats very well, they become very slimy during soaking. Combine groats, water, olive oil, salt, pepper, garlic and other spices/herbs if using, in a blender. Blend until smooth.
3. Place two 8-9-inch cake pans into the hot oven for 5 minutes. Remove them from the oven and add 1-2 tablespoons of olive oil to each (use cooking spray if your cake pans stick). Place back into the oven for 3-5 minutes.
4. Working quickly, pour the batter into the pans – spread it inside evenly. Bake for 15 minutes, then flip the crusts and bake for 10 more minutes.  Remove from the oven and reduce temperature to 400 F.

to make the pizzas
1. Place crusts onto a parchment paper covered baking sheet. Smear most of the roasted garlic over the crust.
2. Slice the bell pepper chunks into smaller pieces if you wish. Arrange the eggplant and pepper slices on the crusts snuggly, to cover most of the surface.
3. Place pizzas back in the oven and bake for 10-15 more minutes. Sprinkle with feta cheese (if using) and finely chopped kale or other greens.
4. Let cool slightly before slicing.