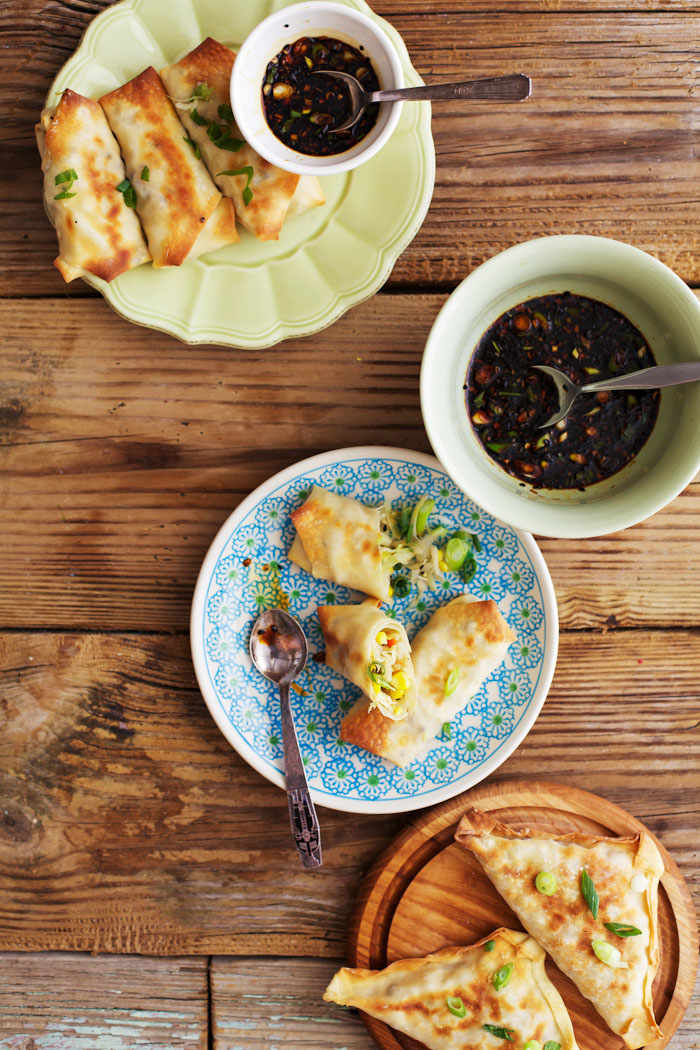 I grew up in a society that considered corn an unhealthy vegetable. This may have been more of an opinion of my entire extended family, and although I now realize how silly it is, this strong influence still prevents me from including much corn in the meals I cook. I recently realized no recipe calls for corn in my cookbook, although it is a very produce-heavy book. To be fair, the corn that I grew up with in Russia was somewhat different from what is available in the U.S. – it was tougher and not as sweet, but still tasty in its own way. Buttered corn on the cob was mostly a street food, sold by village women along the side of the road or at train and bus stations. For us kids, it represented the excitement and romanticism of traveling, but for the adults it was more about anti-sanitary food practices and future stomach viruses. 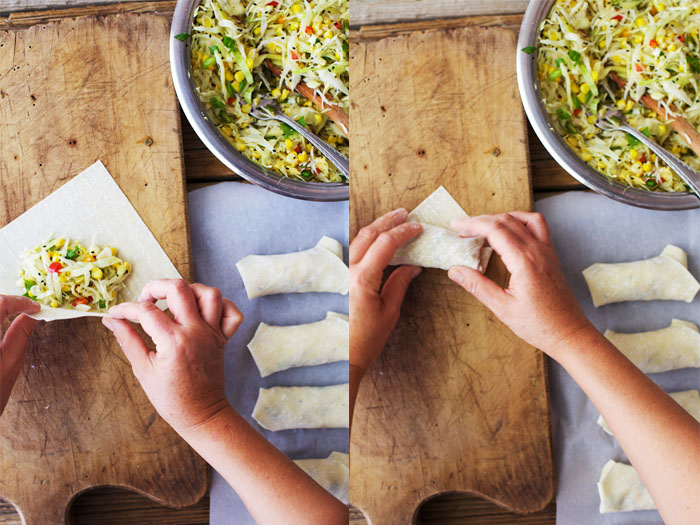 My mother, grandmother and aunts believe that corn is hard to digest and nutritionally empty. Or maybe they just predicted the GMO boom around corn, who knows.
True to my upbringing, I only cook with corn when my corn-loving American husband buys it. I love it raw in salads and salsa, boiled on the cob, or combined with bell peppers and scallions in various dishes. 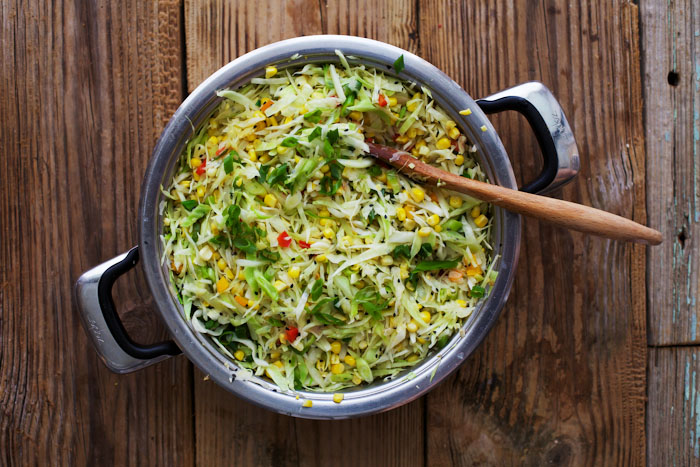 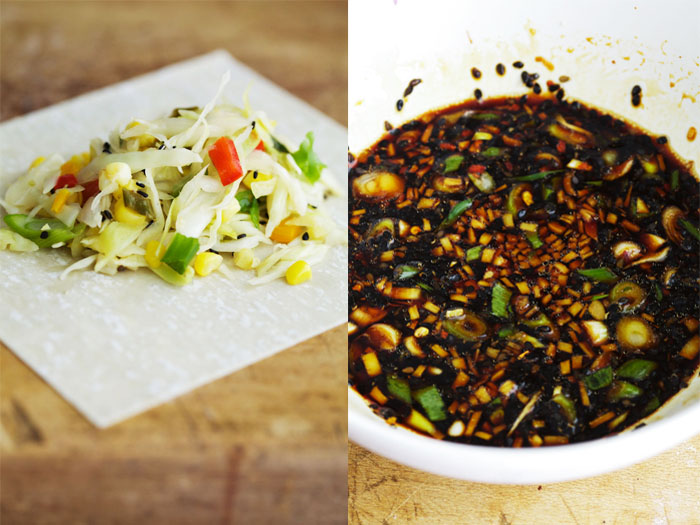 Spring rolls are a great, quick way of serving all kinds of vegetables – who doesn’t love spring rolls?  I originally made them with store bought egg roll wrappers, but since then came up with the very simple whole spelt dough that works beautifully as any kind of wrapper. I’ve also tried wrapping this filling into a double layer of rice paper and baking it the same way, which is also very good, although a little chewy. Another lighter alternative is wrapping the veggies into a single layer of rice paper like this. 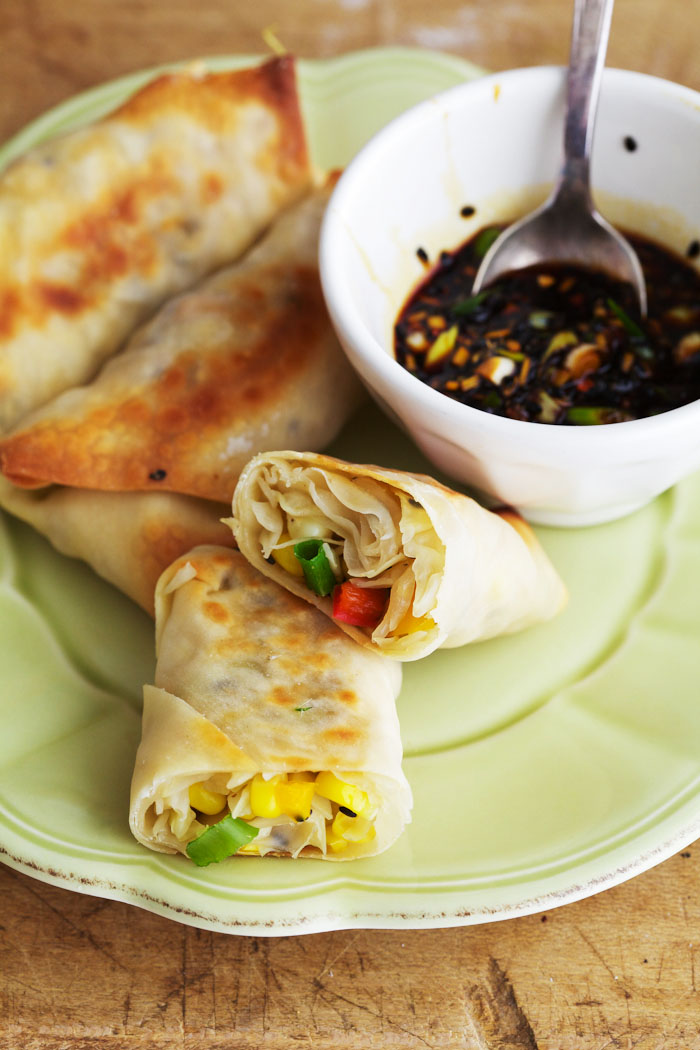 to make the wrappers
1. Combine flour with salt in a large bowl. Mix in the oil.
2. Add in the boiling water gradually, while mixing with a wooden spoon. Then knead with your hands until you end up with a soft, non-sticky dough.
3. Cover and let rest for 30 minutes.
4. Divide into 2 even portions. Roll each into a rope and cut into 10 pieces each. Form 20 balls and keep them covered.
5. Flour your working surface and rolling pin. Take one ball at a time and roll in into a thin wrapper. If using a mixture of flours, it will be easier to roll. Store the wrappers on top of each other, lightly floured in between, and covered. Alternatively, use store bought wrappers.

to prepare the filling
1. Heat the ghee/oil in a large frying pan over medium heat. Add shallot, ginger and the white parts of green onions. Saute for 2 minutes.
2. Add in the bell pepper and corn and saute for 4 more minutes.
3. Add the cabbage, saute for about 3 more minutes, until wilted. Remove from heat, add the green onion, lime juice, salt, pepper and sesame seeds if using. Let cool.

to make the spring rolls
1. Preheat oven to 375 F.
2. Working with one wrapper at a time, place about 2 tablespoons of filling in the center. Fold the lower end over the filling, followed by the sides. Lightly brush the remaining end with water and roll it tightly. You can also make them in a shape of empanadas (see photos), I like to play with different shapes sometimes.
2. Place on a parchment paper-covered baking tray and brush with melted coconut oil or ghee.
3. Bake for 10 minutes, then flip and bake for 10 minutes more. If using homemade wrappers, it may take a couple minutes longer for the rolls to become slightly golden.
4. Serve with Laura’s awesome spicy tamari sauce