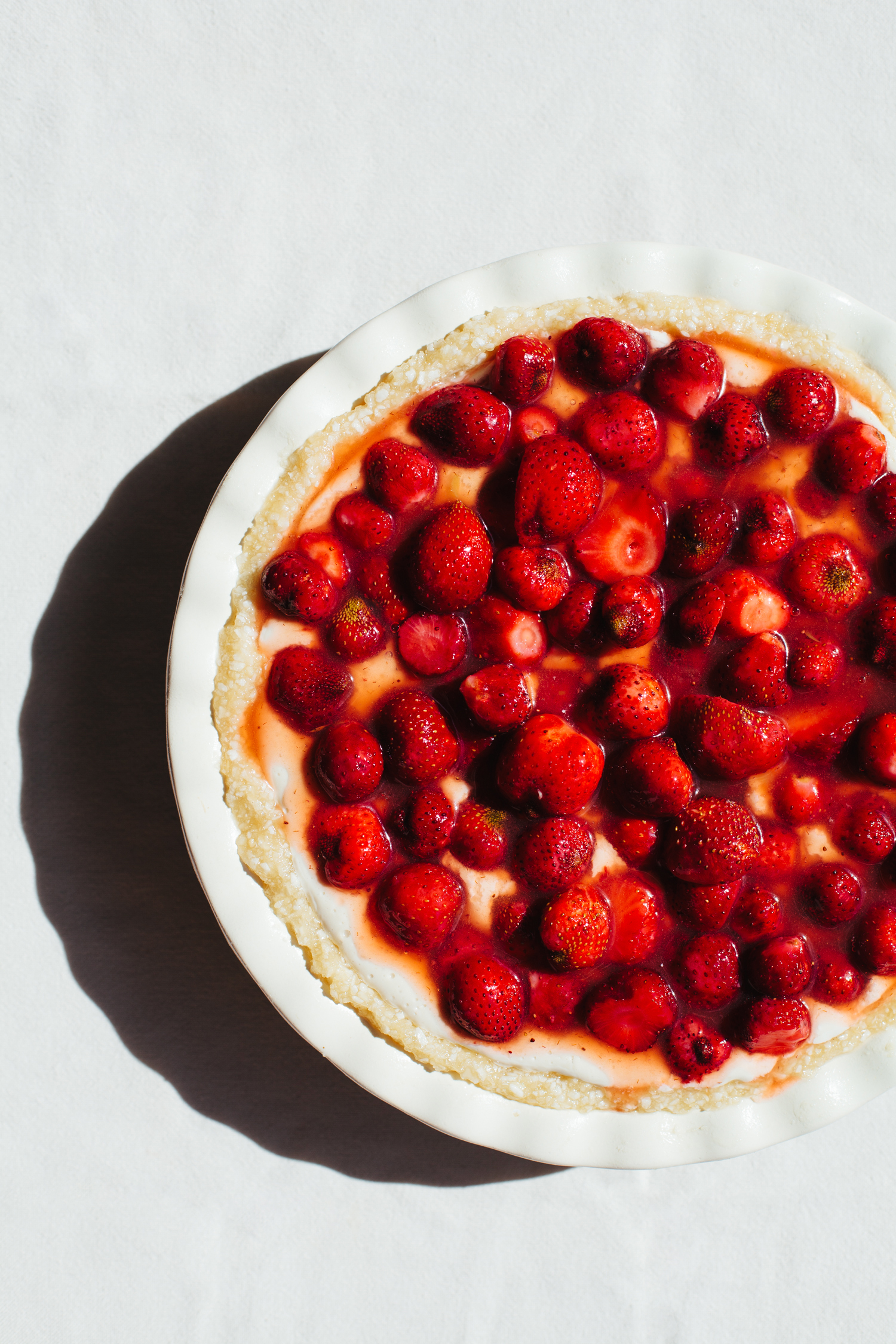 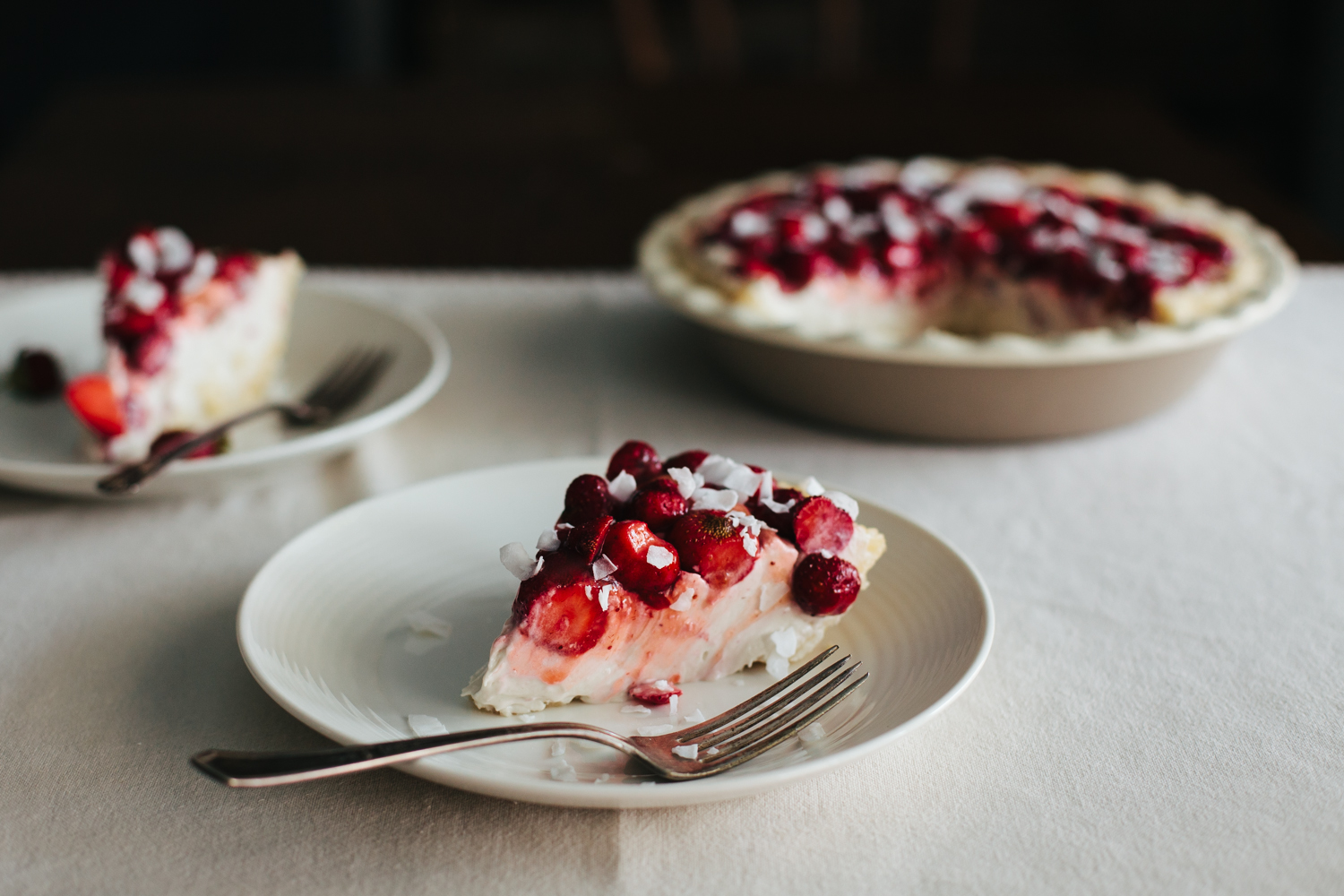 Strawberry season happens much earlier in Florida than in most places, and it’s already come and gone. Thankfully, I have a friend who shares my enthusiasm for getting my paws on some really good local berries, and is always willing to come along on the hour plus drive to an organic strawberry farm in the area. Something aligned this year, and the strawberry harvest was like nothing we’ve ever seen before. The berries were small, but absolutely explosive in taste – almost unnaturally sweet and as though artificial from the intensity of their strawberry flavor. It was hard to believe that something like that could be produced by the earth and sun alone. We were so astounded by the radioactive berries that we took the journey to the farm twice, since we underestimated the rarity of the situation and didn’t gather enough the first time around. I froze a bunch of the berries, but also went wild with strawberry recipes for the blog. I’m going to spread them out a bit throughout the spring/summer, since I know the season happens later for most of you, but hope you guys won’t mind the impending strawberry recipe series. 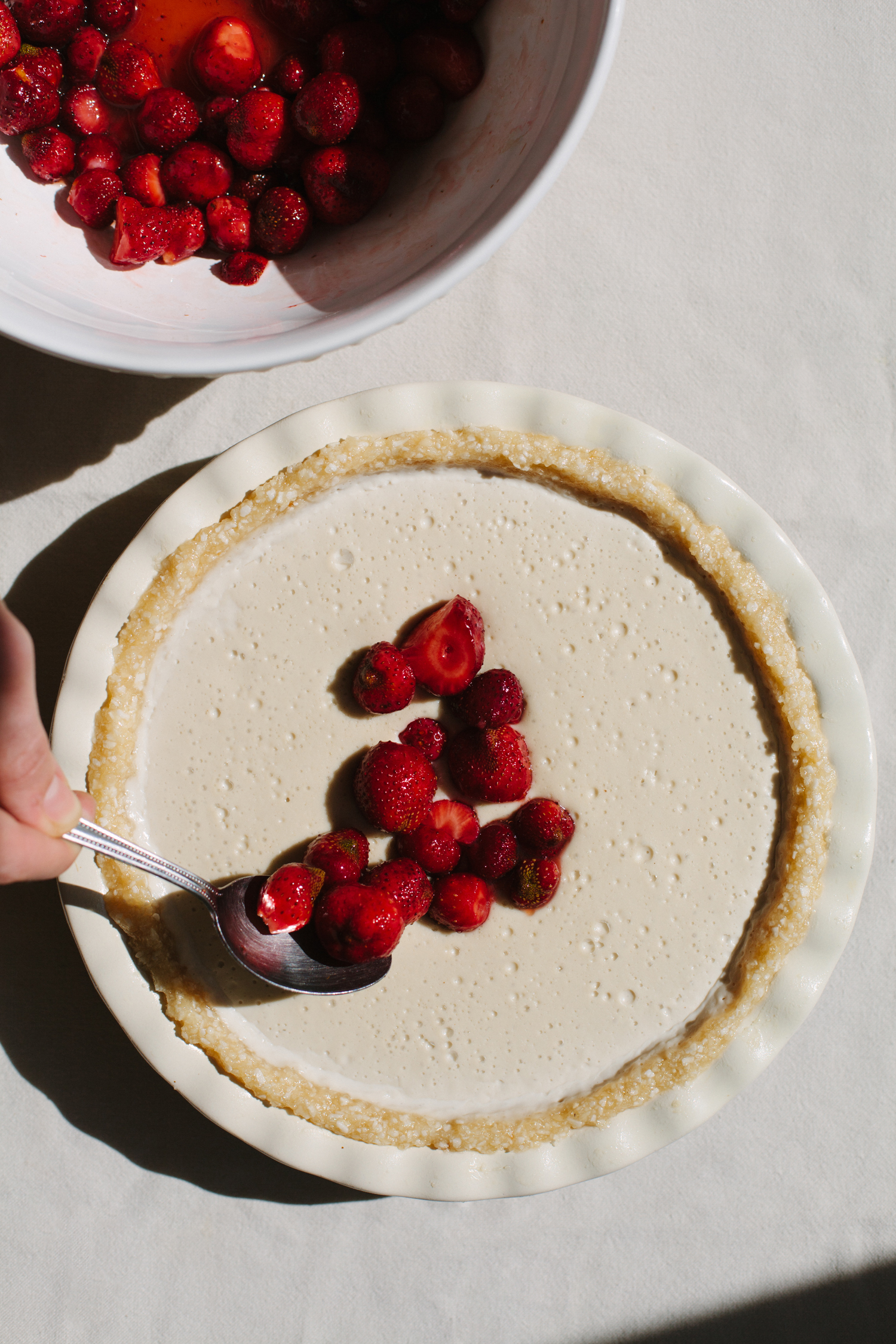 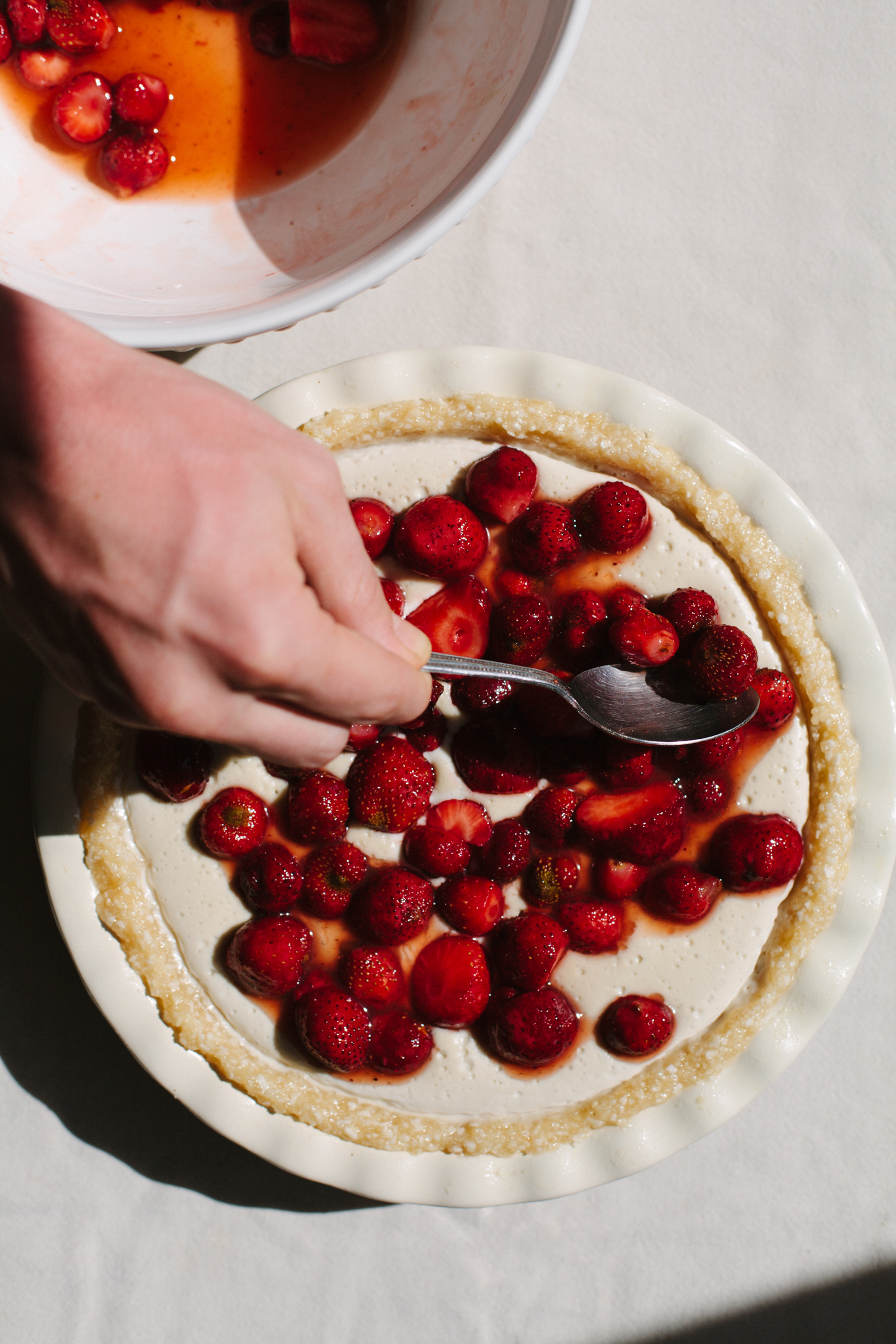 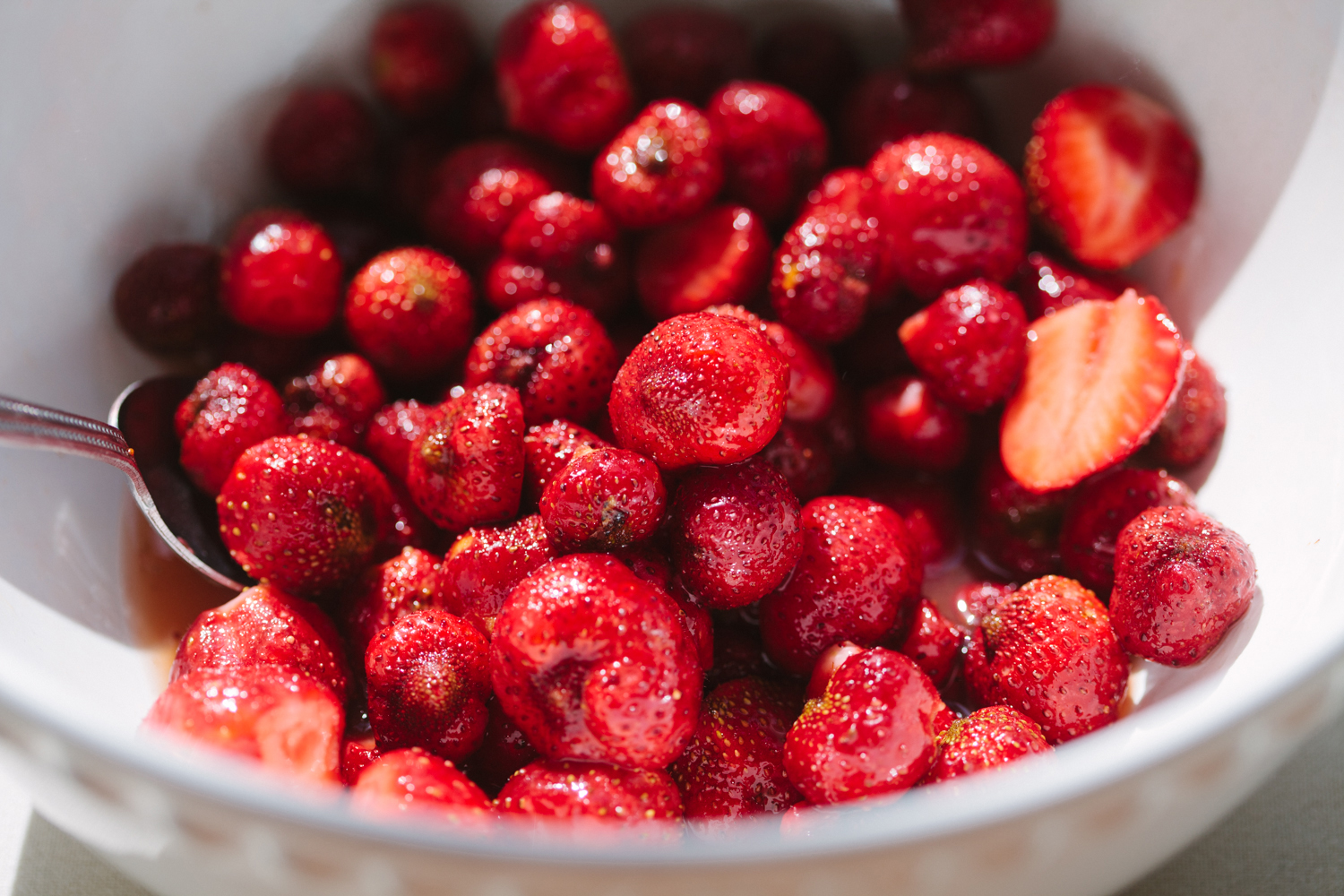 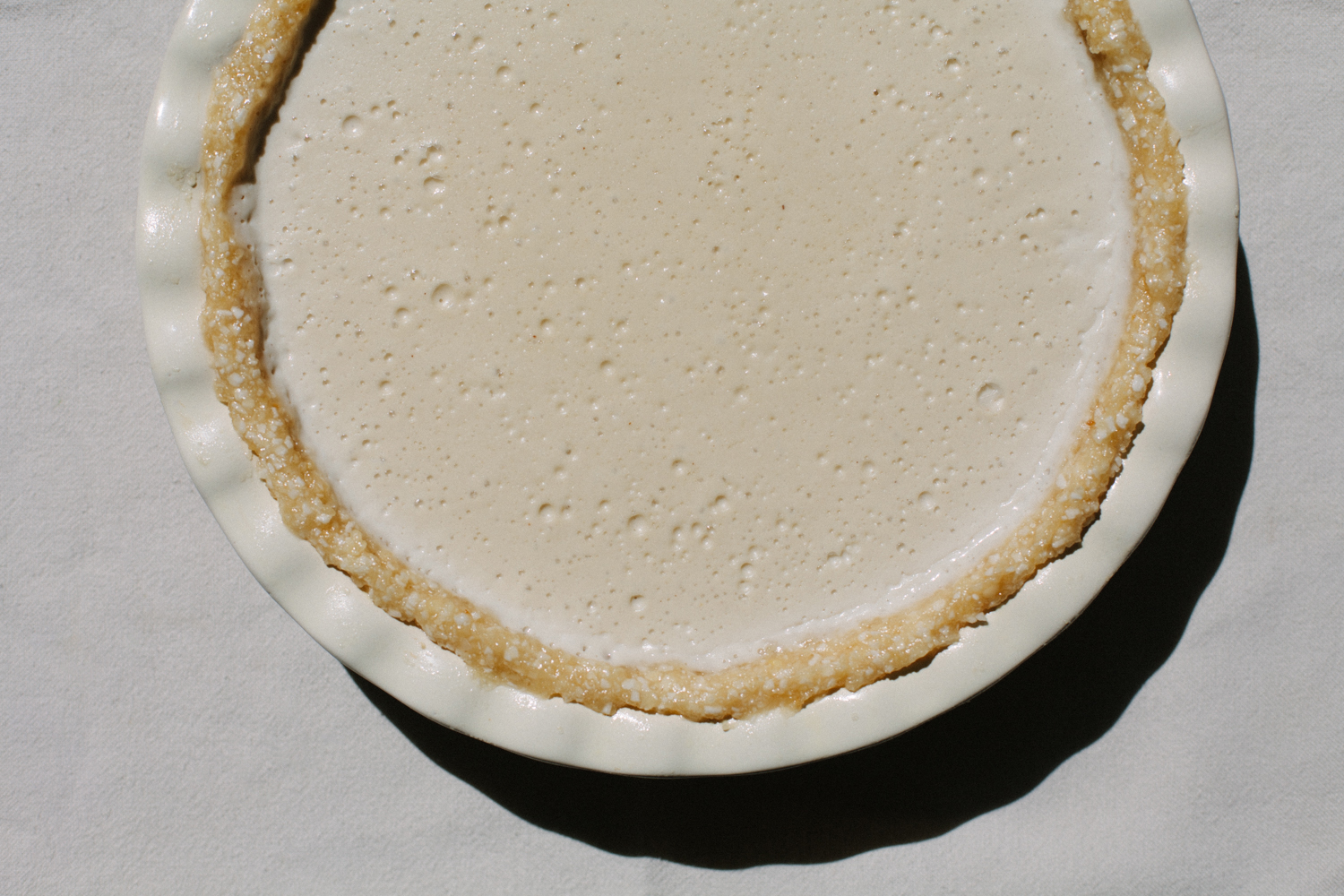 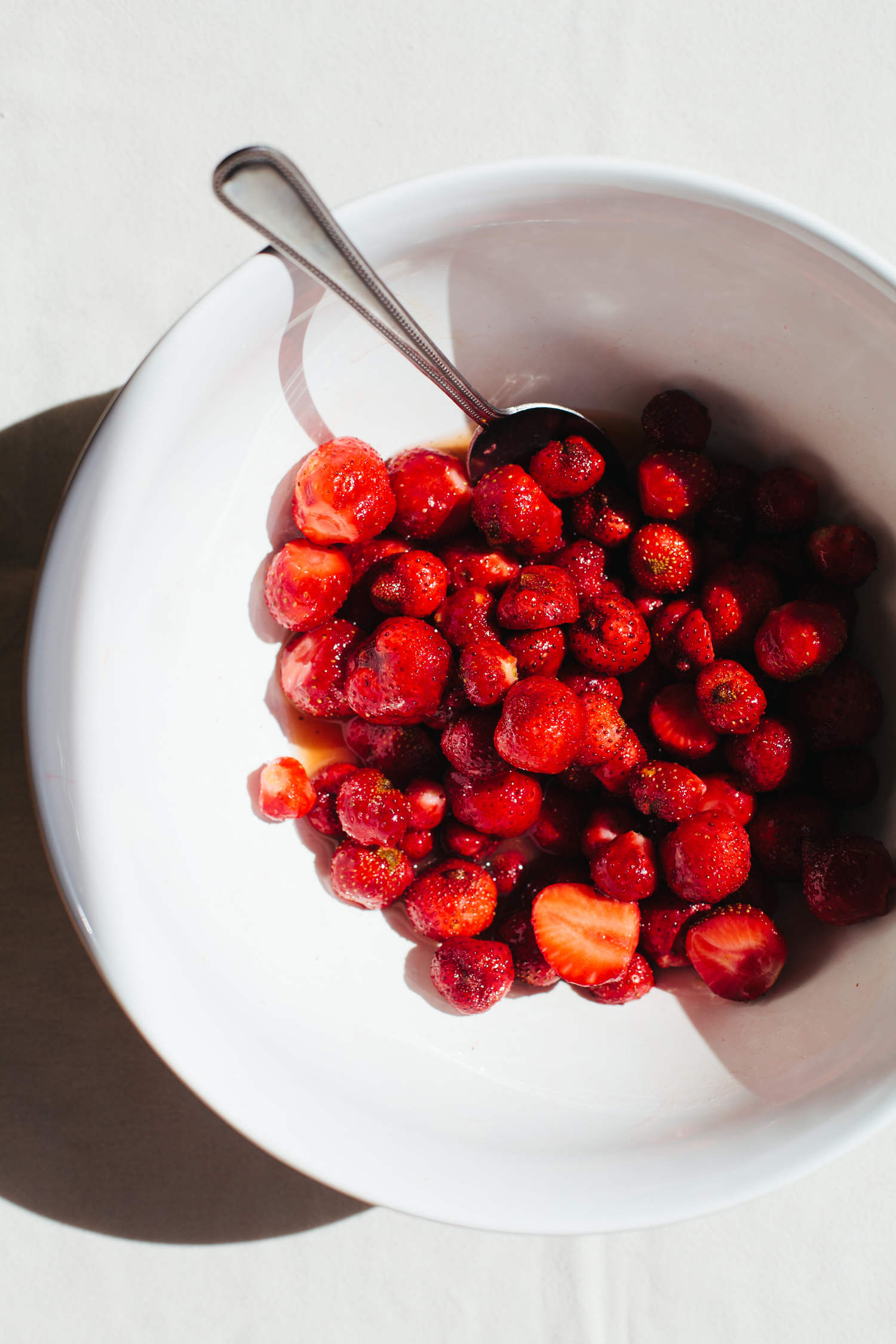 I’ve been wanting to make a coconut cream pie for a long time, but held off until I could figure out a way to make it a bit more noteworthy than just a veganized version of the traditional. Crowning the pie with these beautiful strawberries seemed like the perfect special touch, so I went for it. This pie is nothing short of heavenly. The juiciness of the macerated berries marries so well with the rich, creamy pie base. Think of the perfection that is berries and cream. It’s also worth mentioning that this is an entirely no-bake affair, so if you make this pie in the summer, you won’t need to worry about any oven heat. If you don’t feel like following the recipe for the strawberry topping, you can just top the pie with really good fresh strawberries, or combine your strawberries with a bit of sugar and let them sit to quickly macerate, then proceed to top. I’ll leave you with some wishes for a warm spring and an abundant strawberry season :) 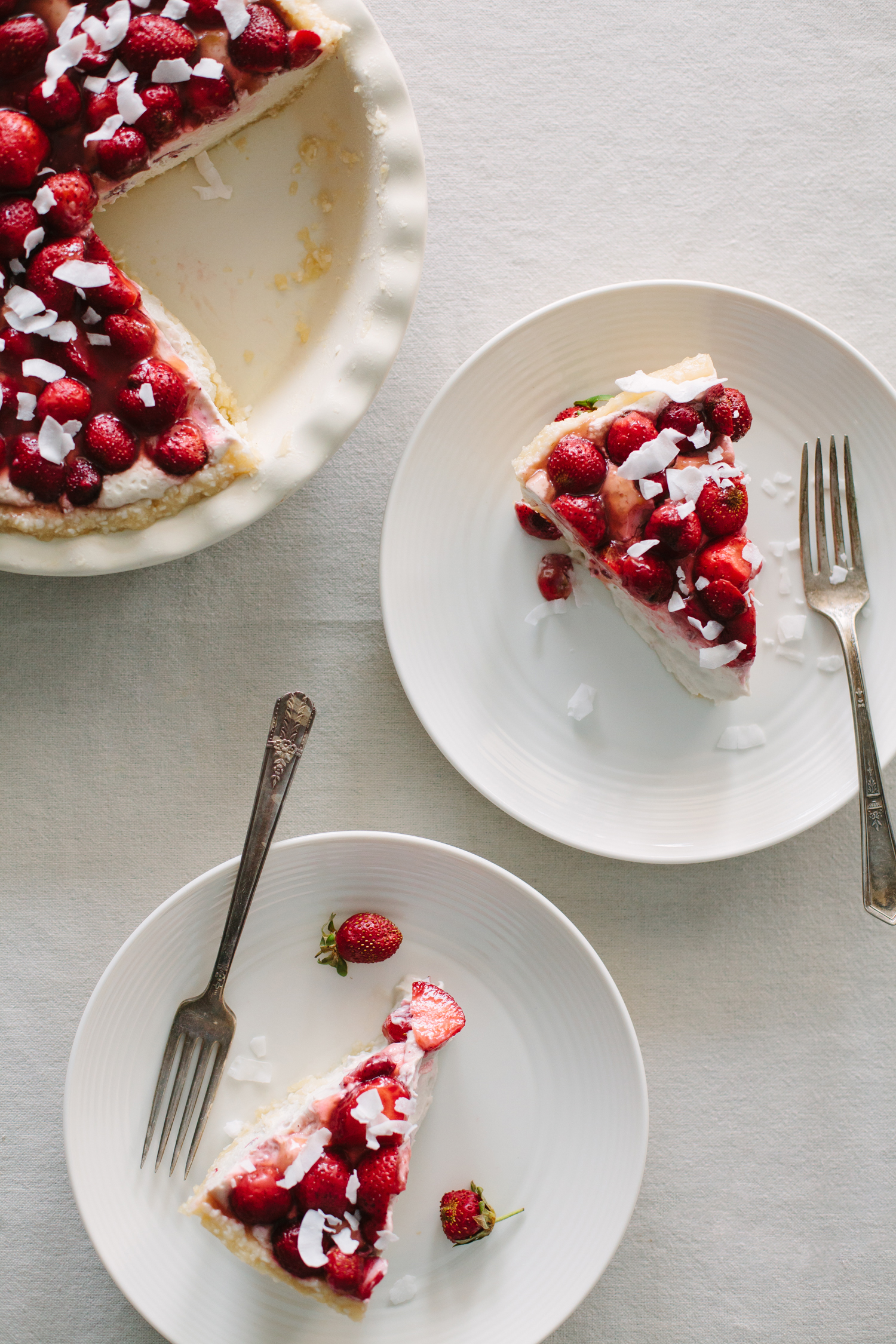 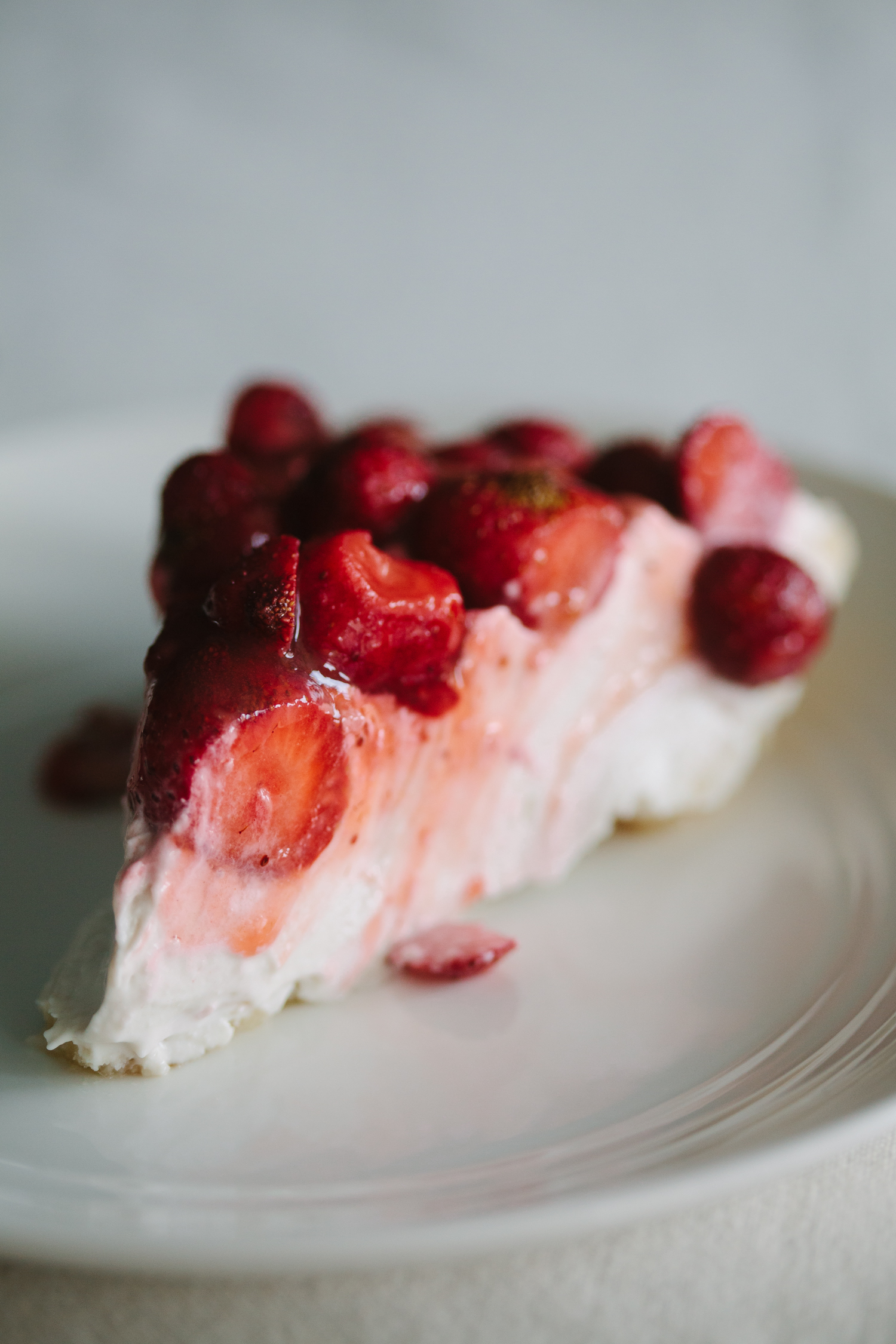 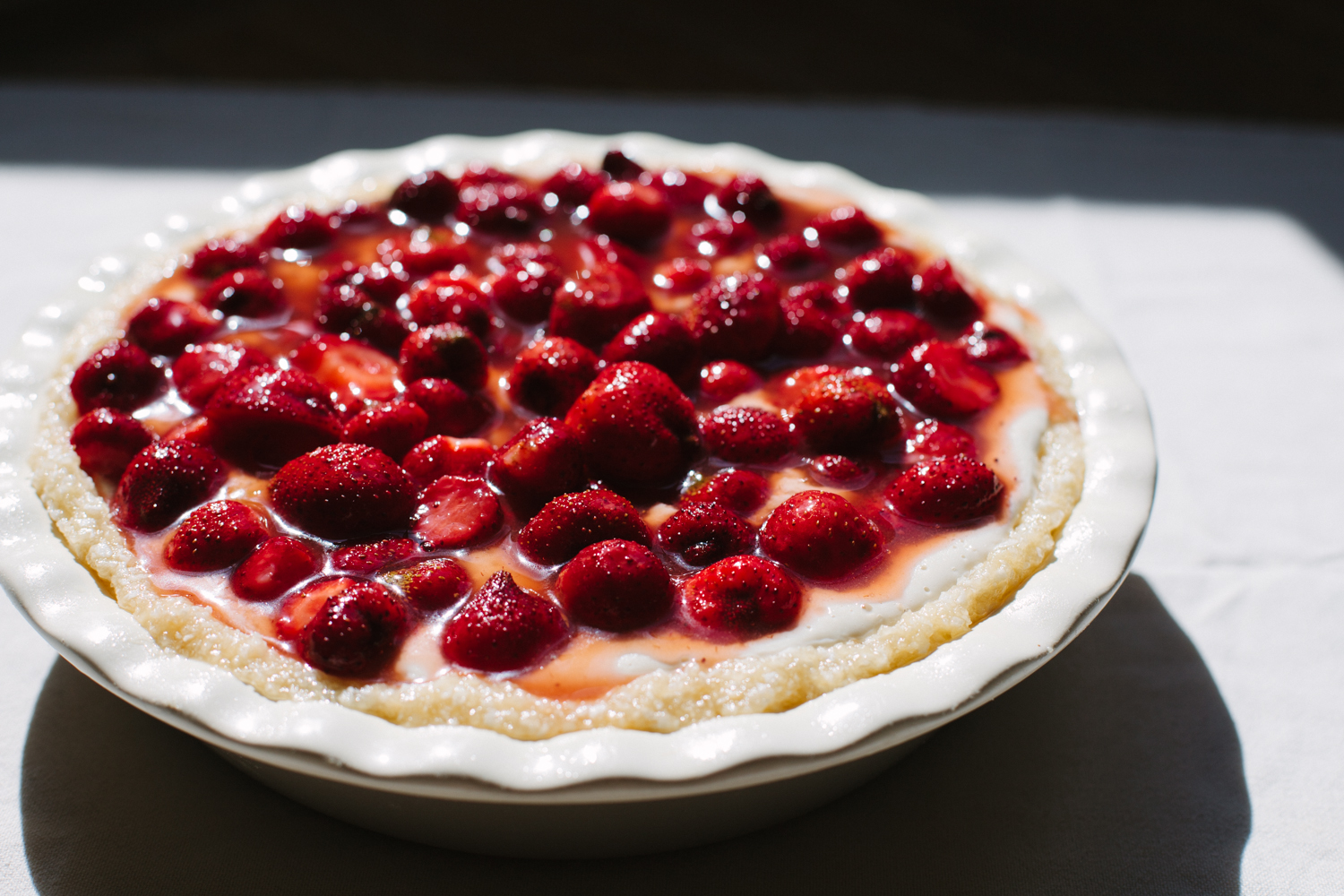 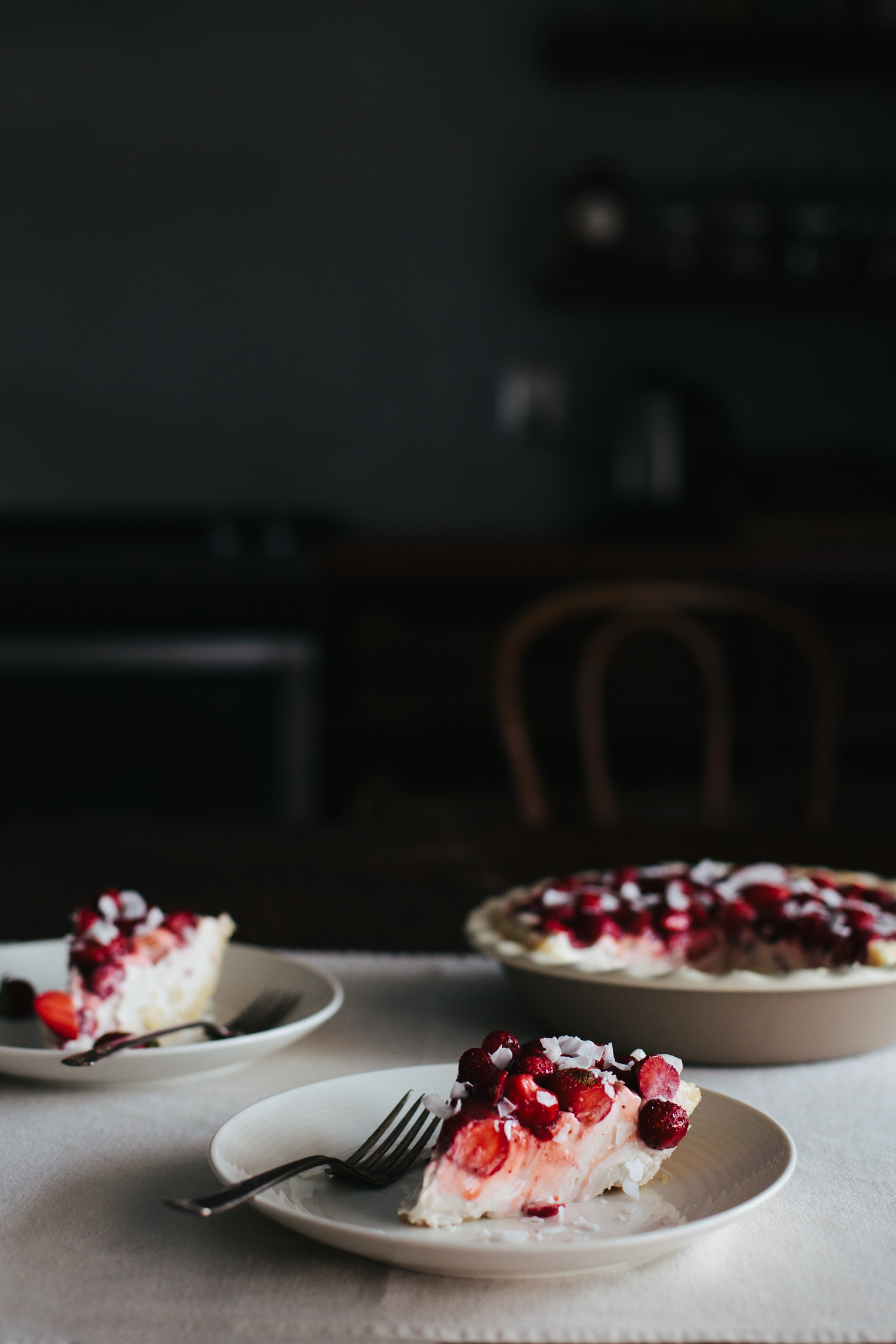 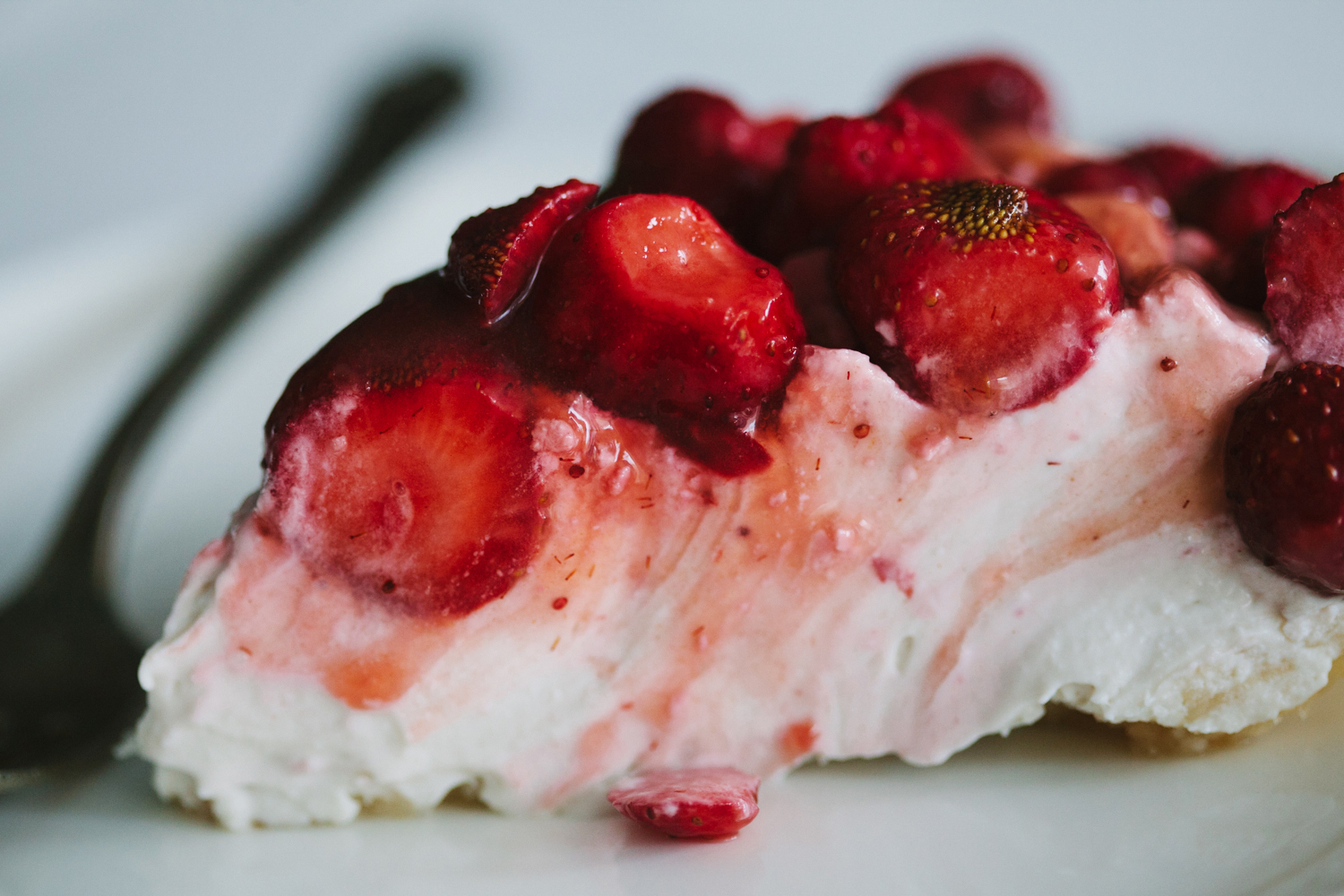 Print
Serves: one 9-inch pie
Ingredients
for the crust
for the coconut cream
for the strawberry topping (adapted from At Home in The Whole Food Kitchen)
Instructions
to make the crust

to make the coconut cream

to make the strawberry topping

Notes
If you don't feel like following the recipe for the strawberry topping, you can make a simpler one. Either mix the strawberries with a bit of sugar and let them sit to macerate, then top, or just top with really good fresh strawberries if you can find them.
3.5.3226
« Quick Rhubarb Soft Serve
Perfect Pressure Cooker Beans + Quick Marinated Beans »