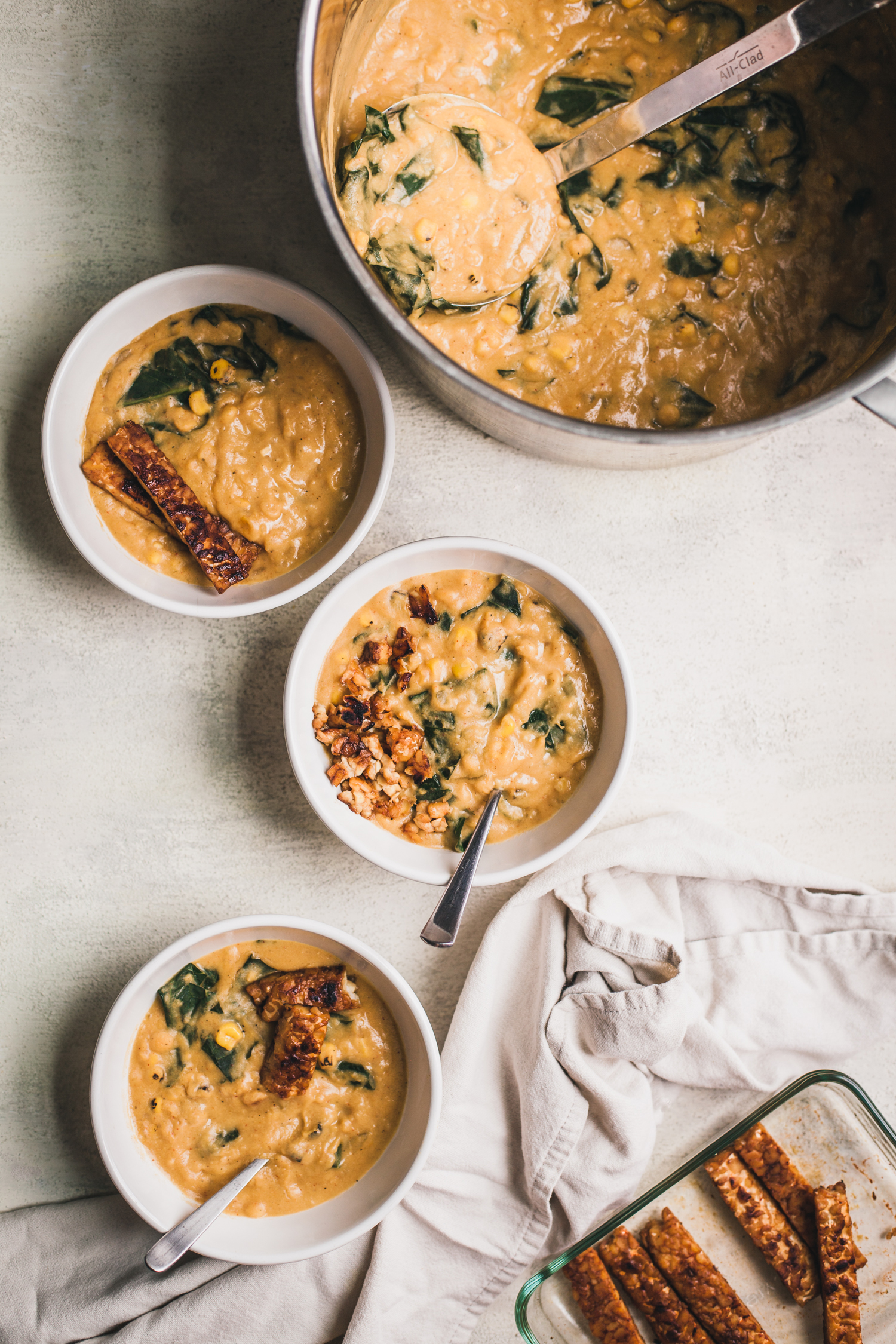 Today we are cooking the creamiest, most perfect chowder from a new cookbook that we are completely in love with, called Power Plates. If you frequent the high-vibe recipe blog world, you probably already know the author of the book, Gena Hemshaw, who is the nutritionist and author behind The Full Helping, and a glowing light in the world of plant-based cooking. Gena’s new cookbook has the most brilliantly simple concept behind it: each recipe features a complete meal, in the sense that it has a balance of complex carbs, healthy fats, and protein, all provided by a variety of whole food ingredients. Thus, each recipe results in a true plate of power. This dreamy chowder, for example, calls for corn and potatoes, as most chowders do, but also includes protein-rich yellow split peas, which take the soup to a complete meal territory, and blend in seamlessly with the rest of the ingredients. It is so good. 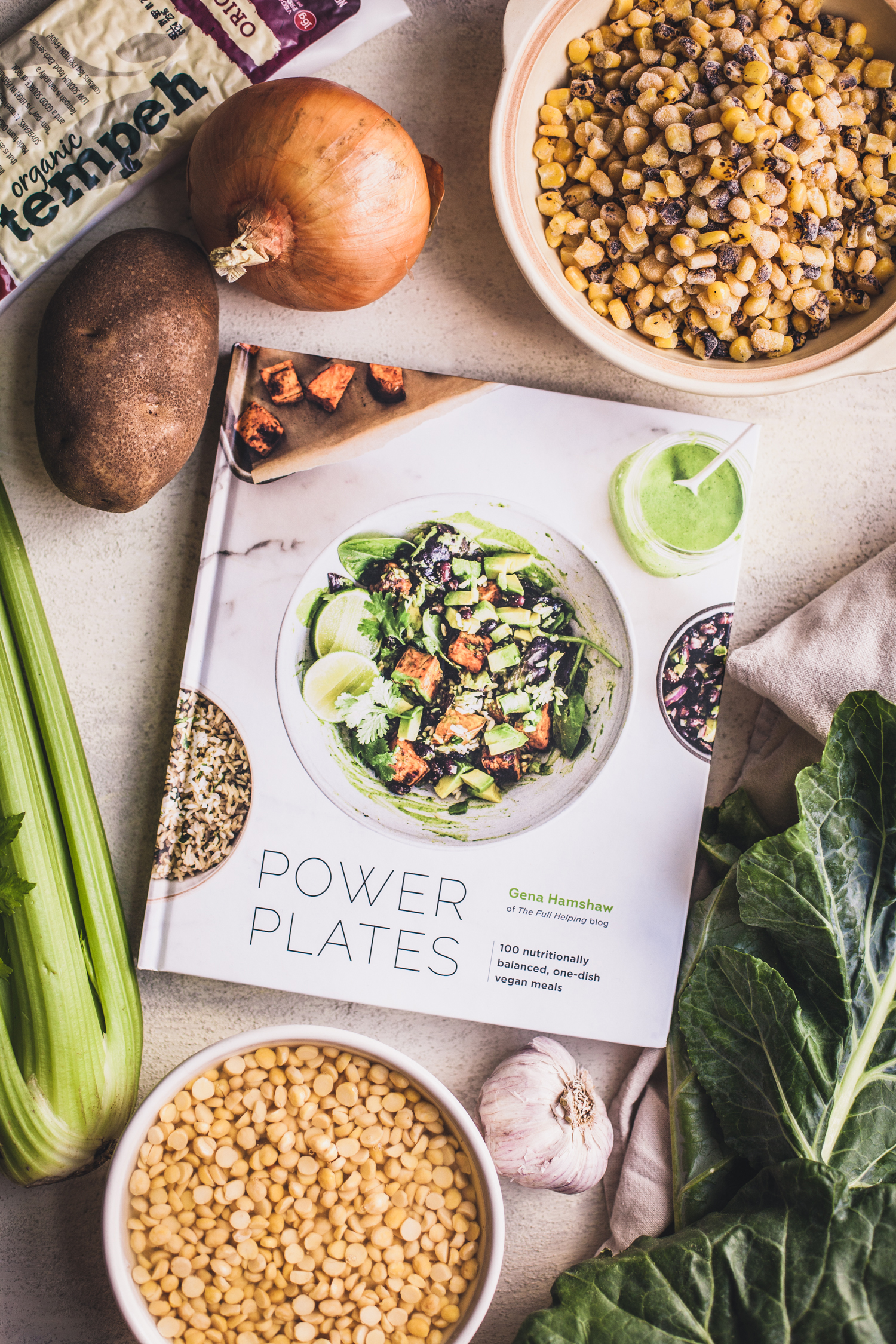 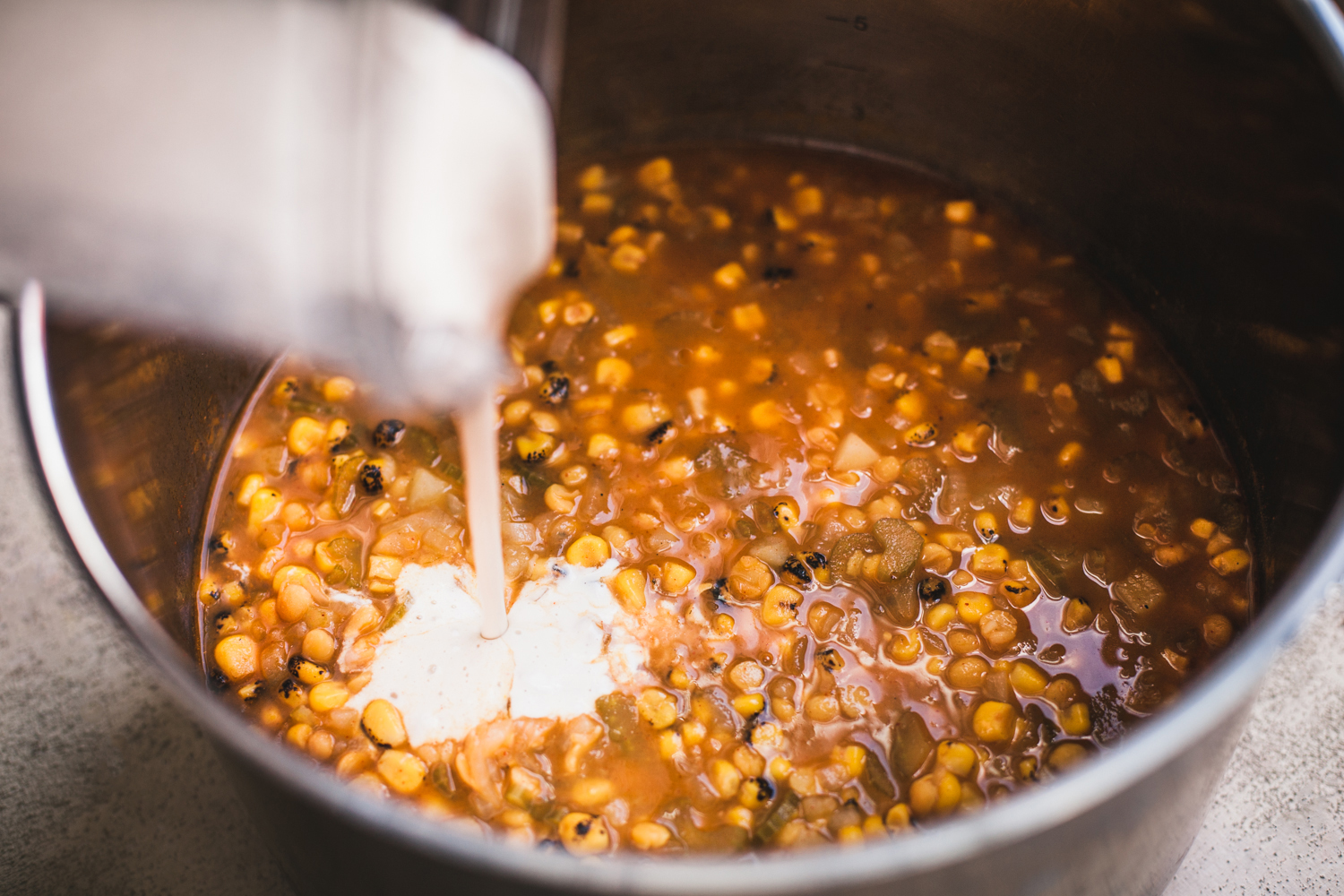 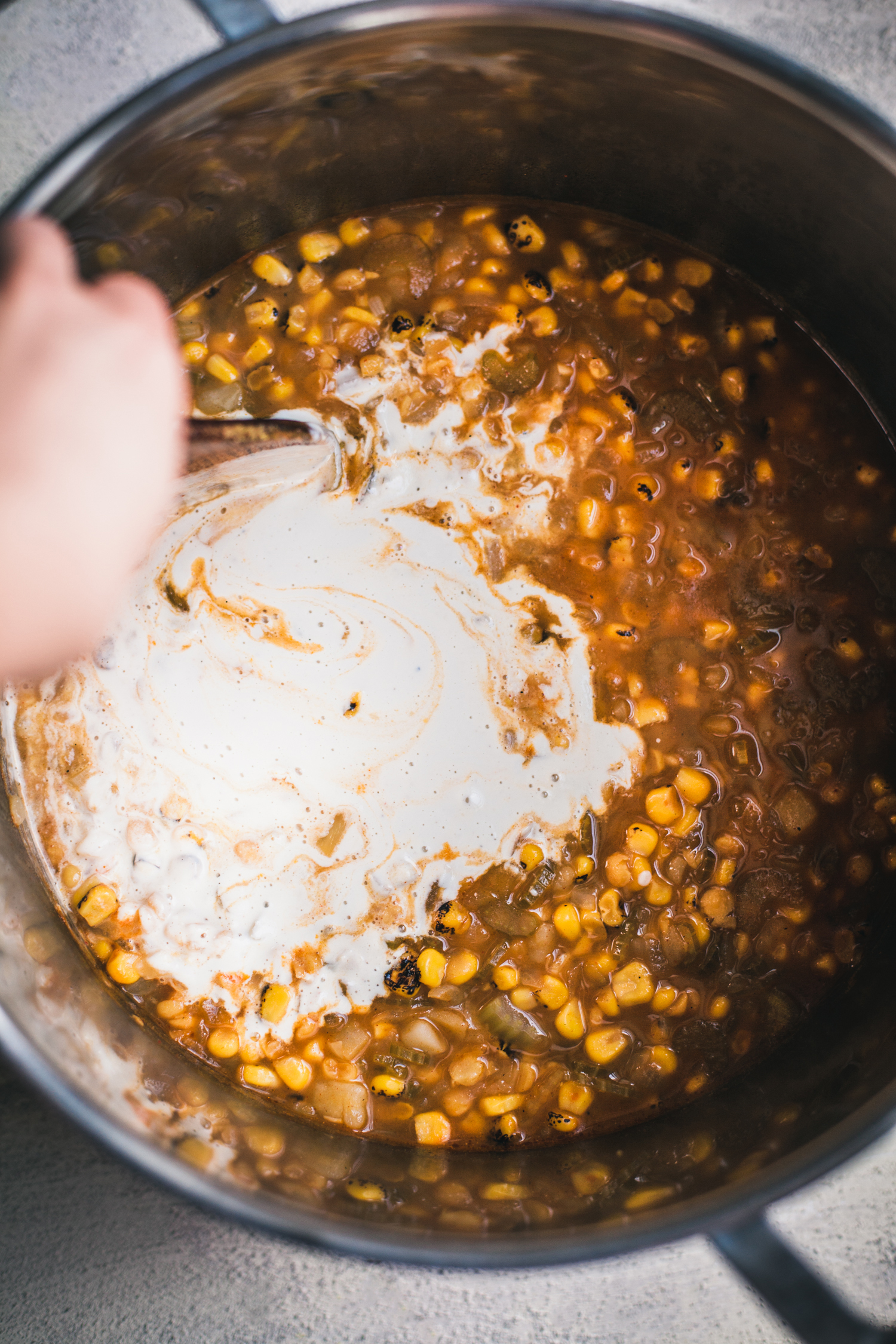 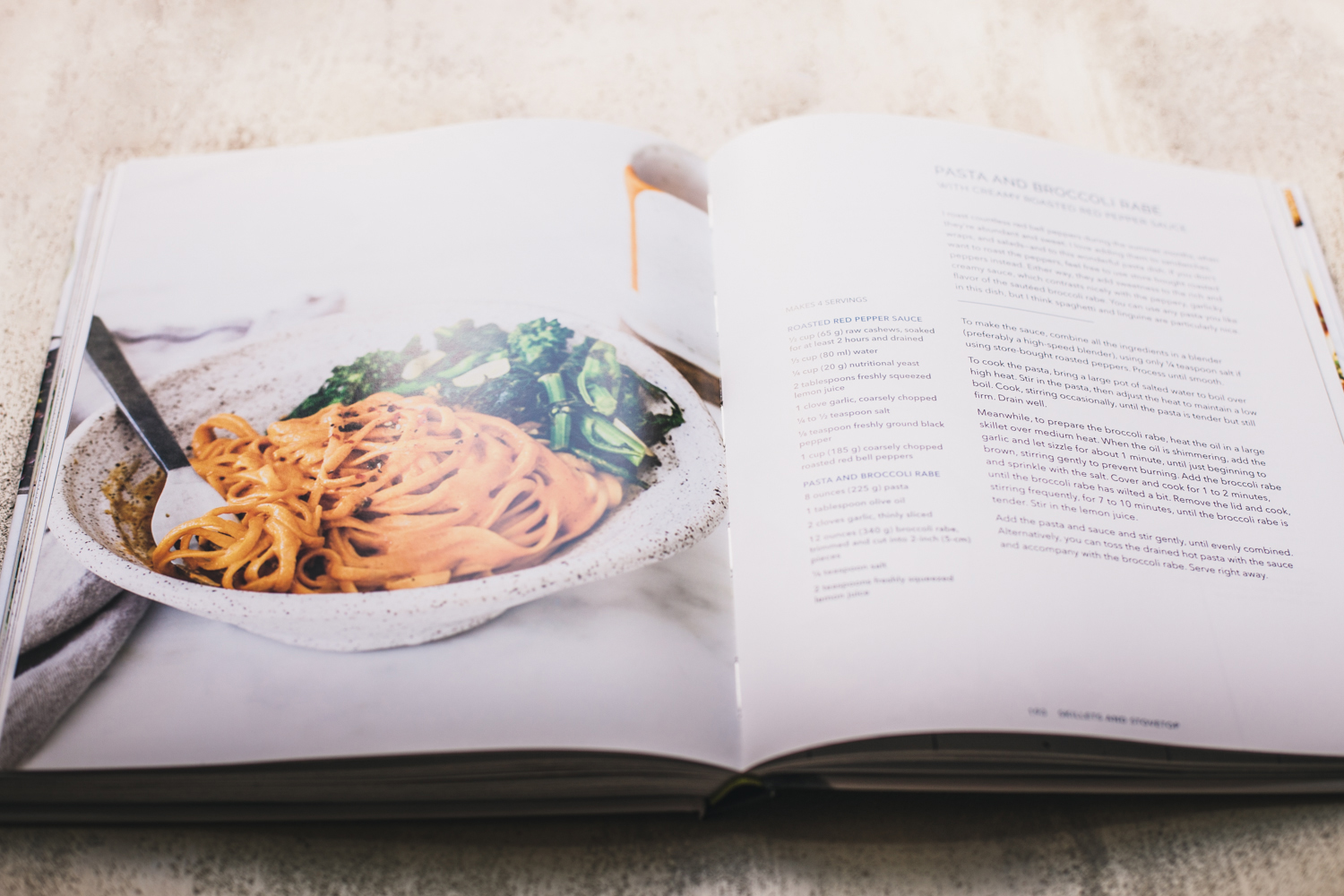 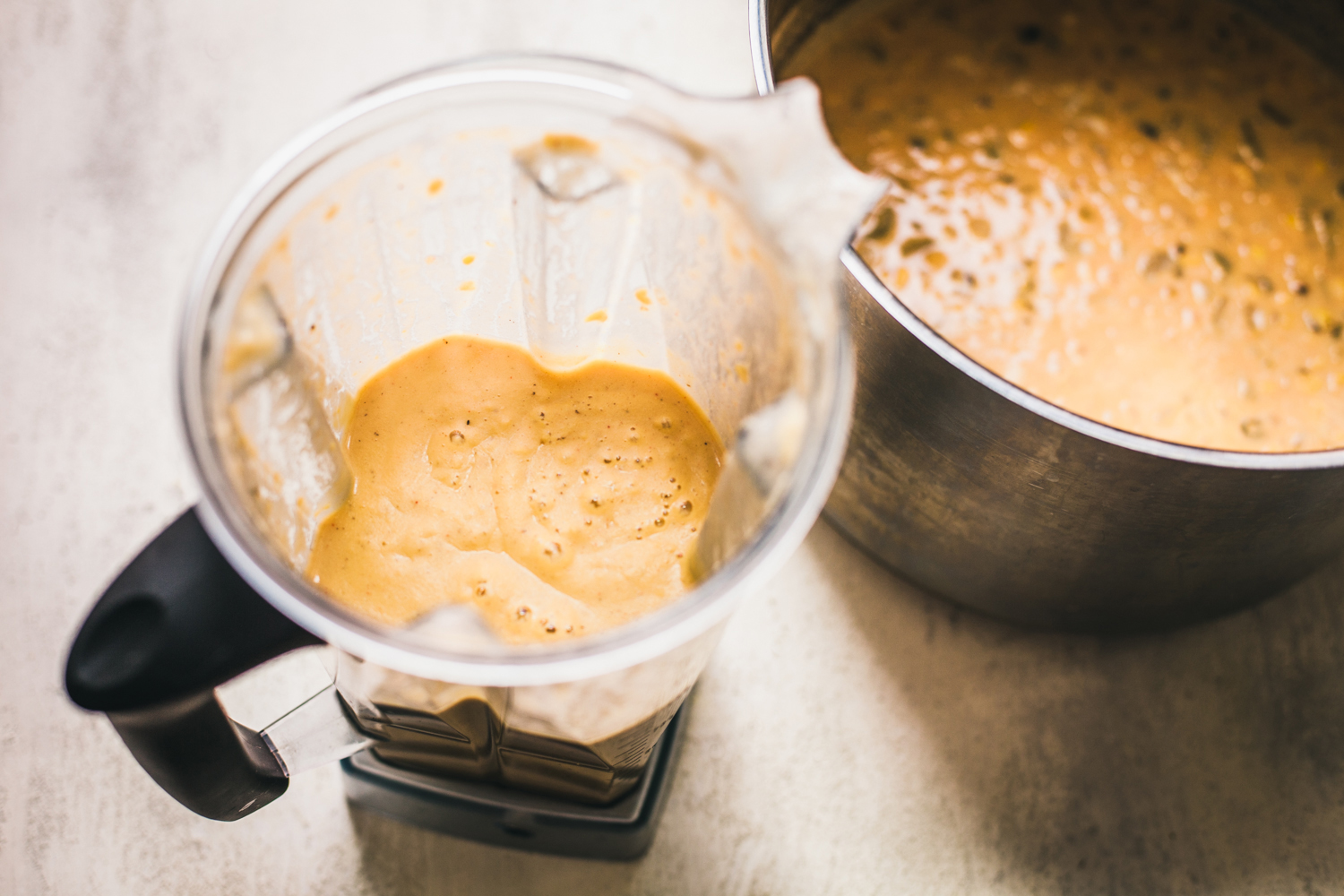 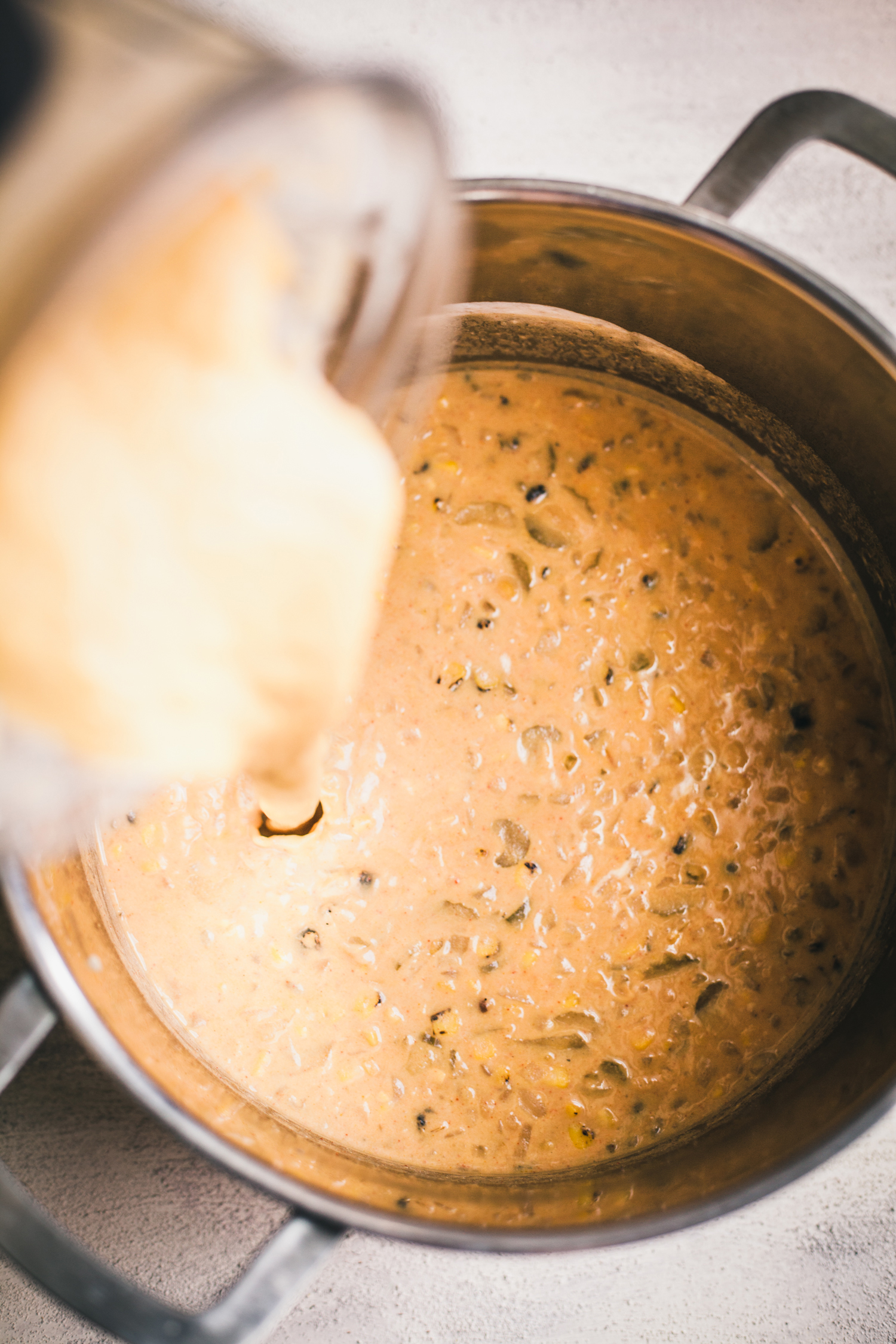 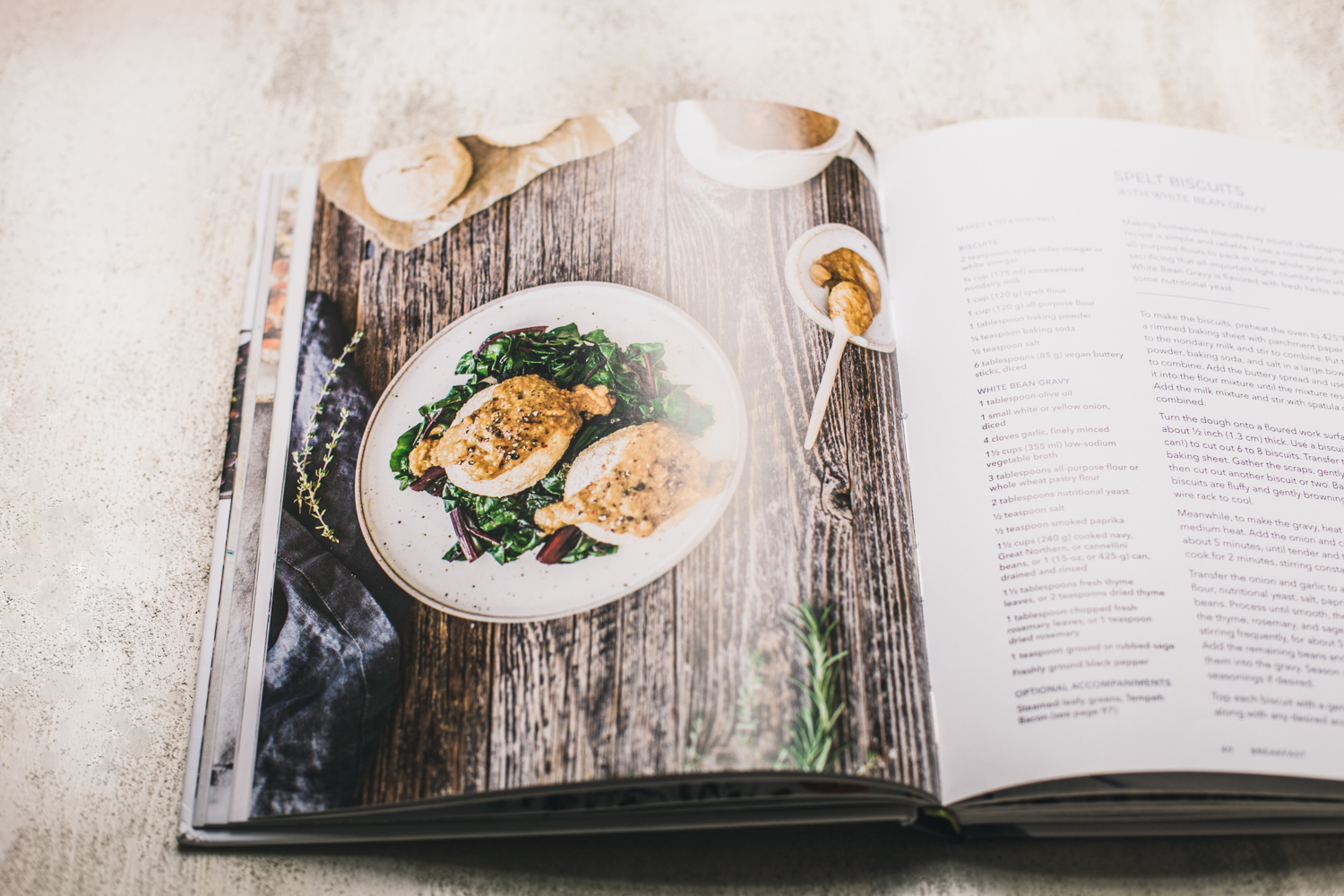 This is definitely the most luxuriously creamy, vegan chowder we’ve ever tried. Even though we cooked it ourselves with full awareness of the ingredients, actually tasting the soup made us do a double take, since it’s hard to believe that there’s no dairy in the recipe. Onions, garlic, corn, potatoes and split peas get cooked in veggie broth, after which the soup gets partially pureed. Blending half your soup and leaving the rest chunky is almost always the best trick for a more lush and interesting texture. But we love that Gena takes it a step further and adds cashew cream into the chowder, which is what takes it into that real deal territory. Collard greens get folded into the soup for some green power and variance in texture, and there’s tempeh bacon, too. You don’t have to have the bacon, but Gena’s recipe is so simple and satisfying, that we couldn’t resist.
In addition to this chowder, we’ve already made the Kimchi Fried Rice and Cheesy Cream of Broccoli Soup from Power Plates, and other recipes we can’t wait to try include the Curried Tomato Stew with Chickpea Dumplings, Umami Bowls, Pasta and Broccoli Rabe with Creamy Roasted Red Pepper Sauce, Vegetable Harvest Pie, and pretty much every other recipe in the book. We love the chapter breakdown, too, which goes as follows: Breakfast, Salads, Soups, Bowls, Skillets and Stovetop, Bakes. We also appreciate the seasonal meal plan guide that Gena thoughtfully included at the end. Such and abundance of inspiration in this book, we hope you check it out :) 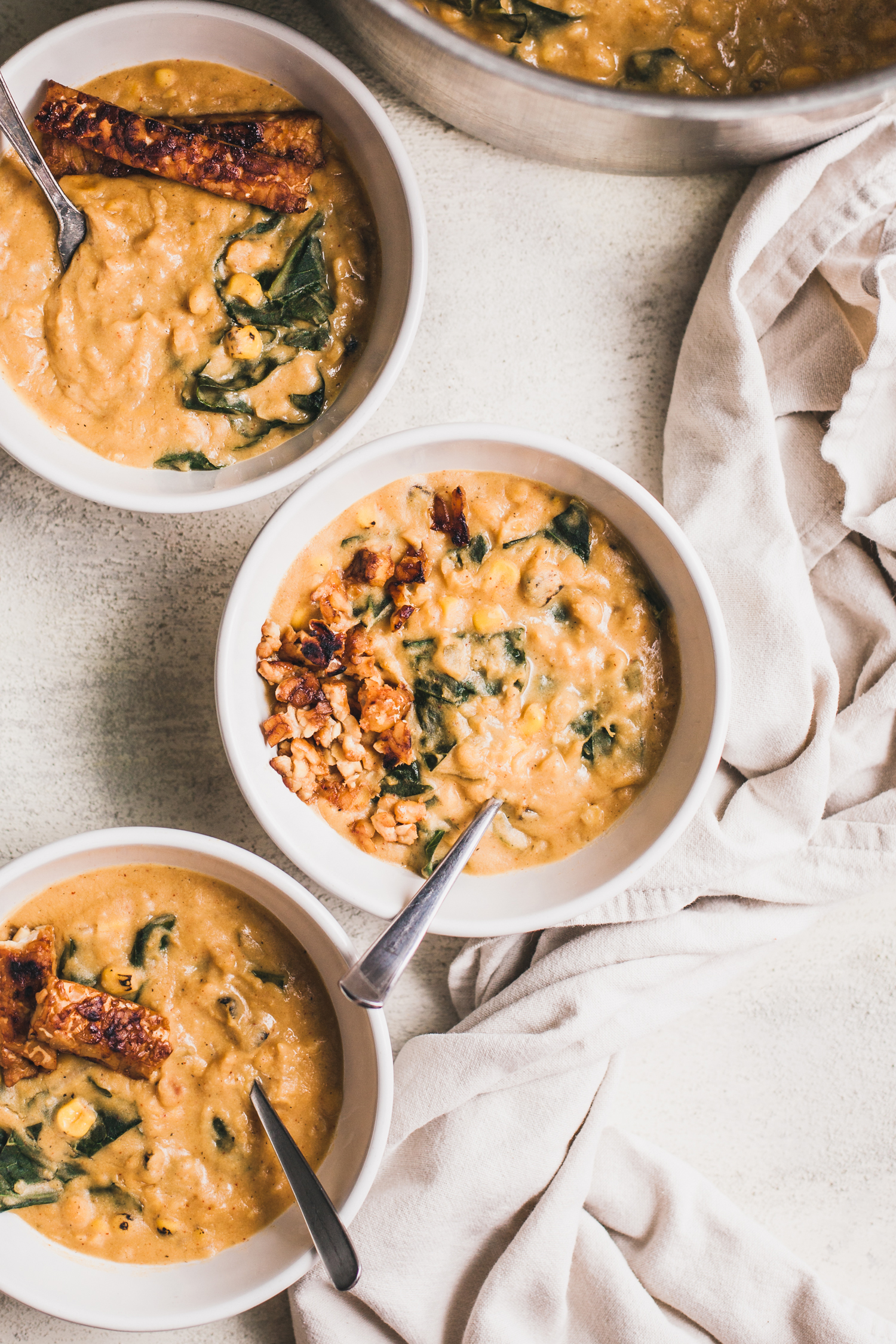 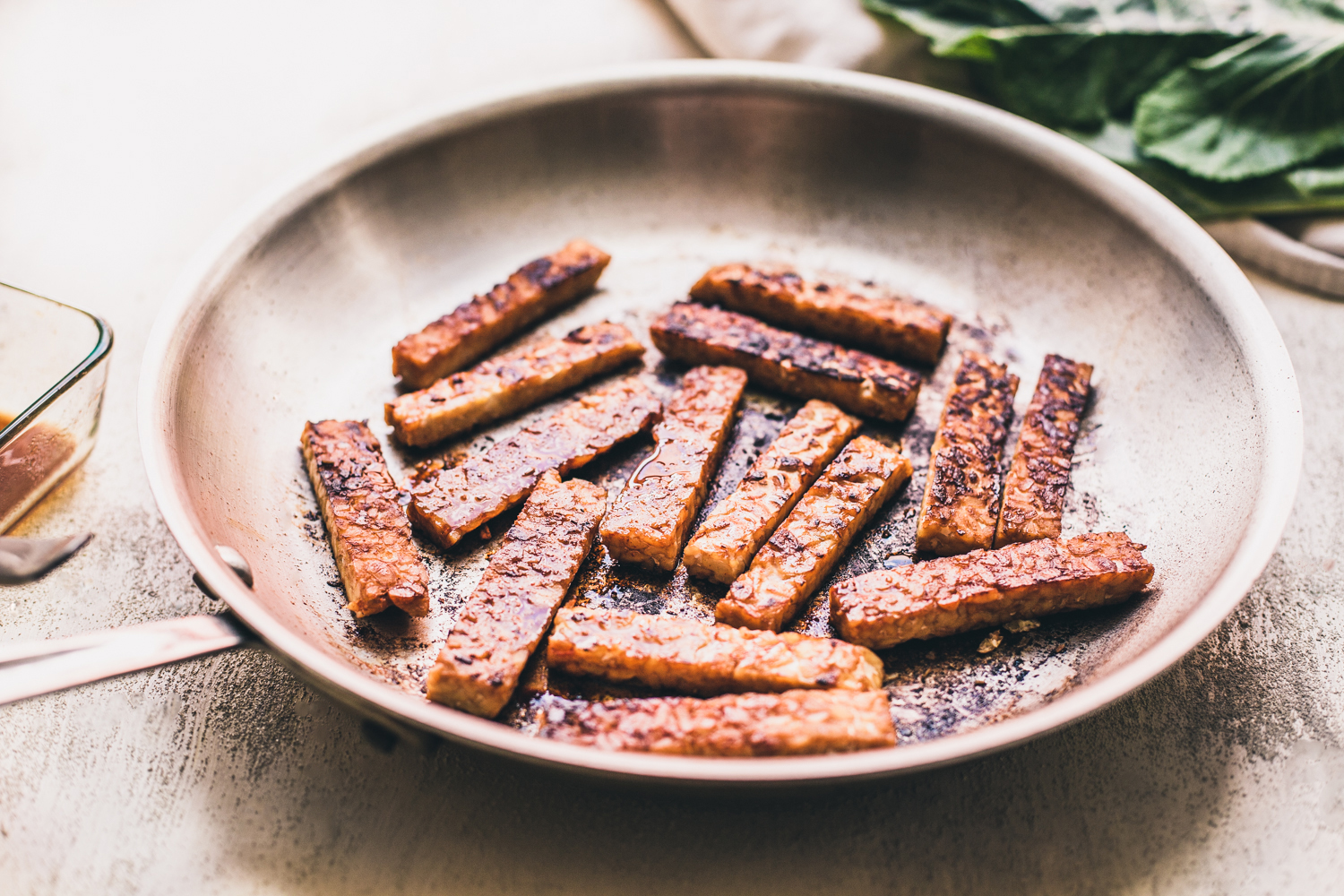 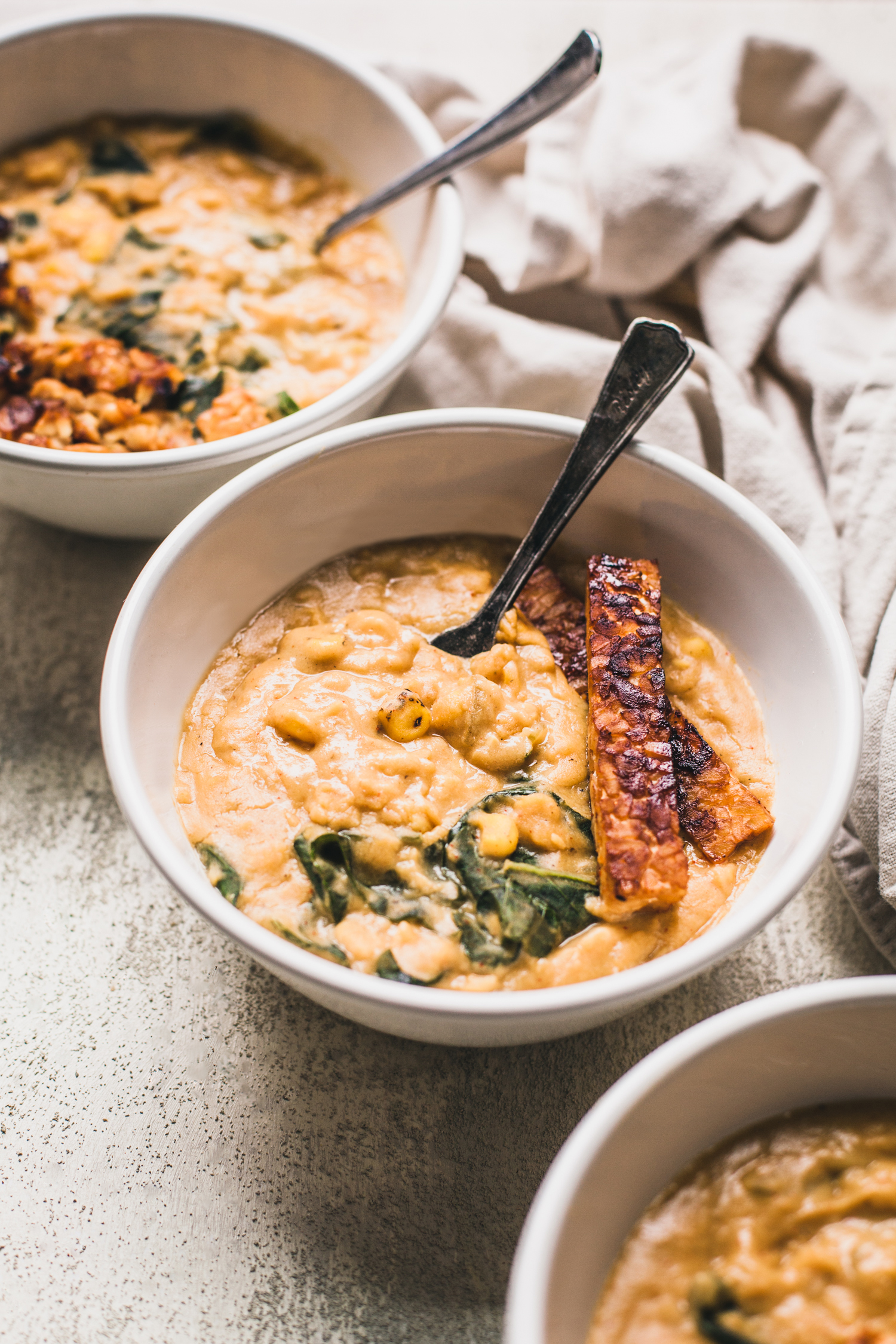 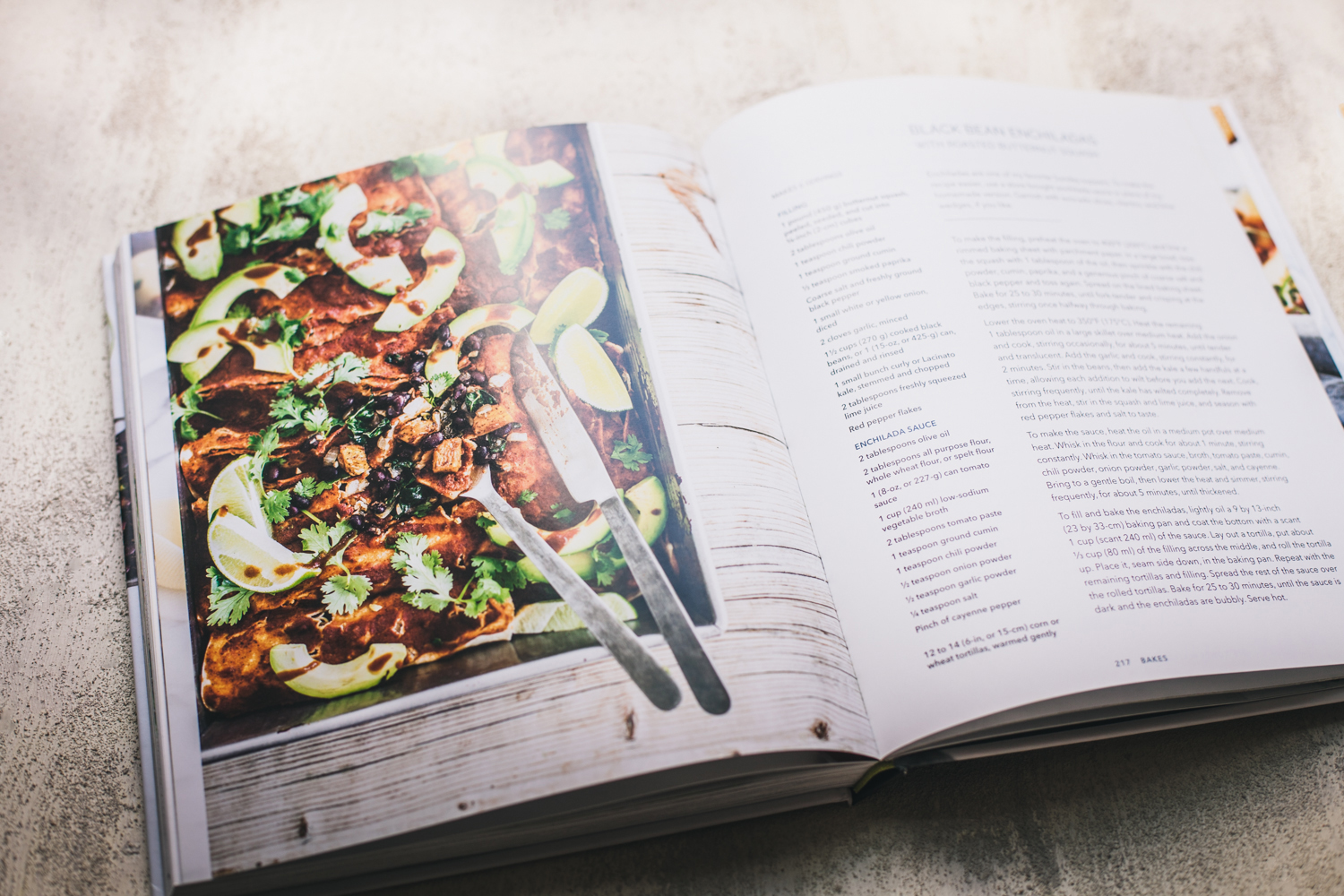 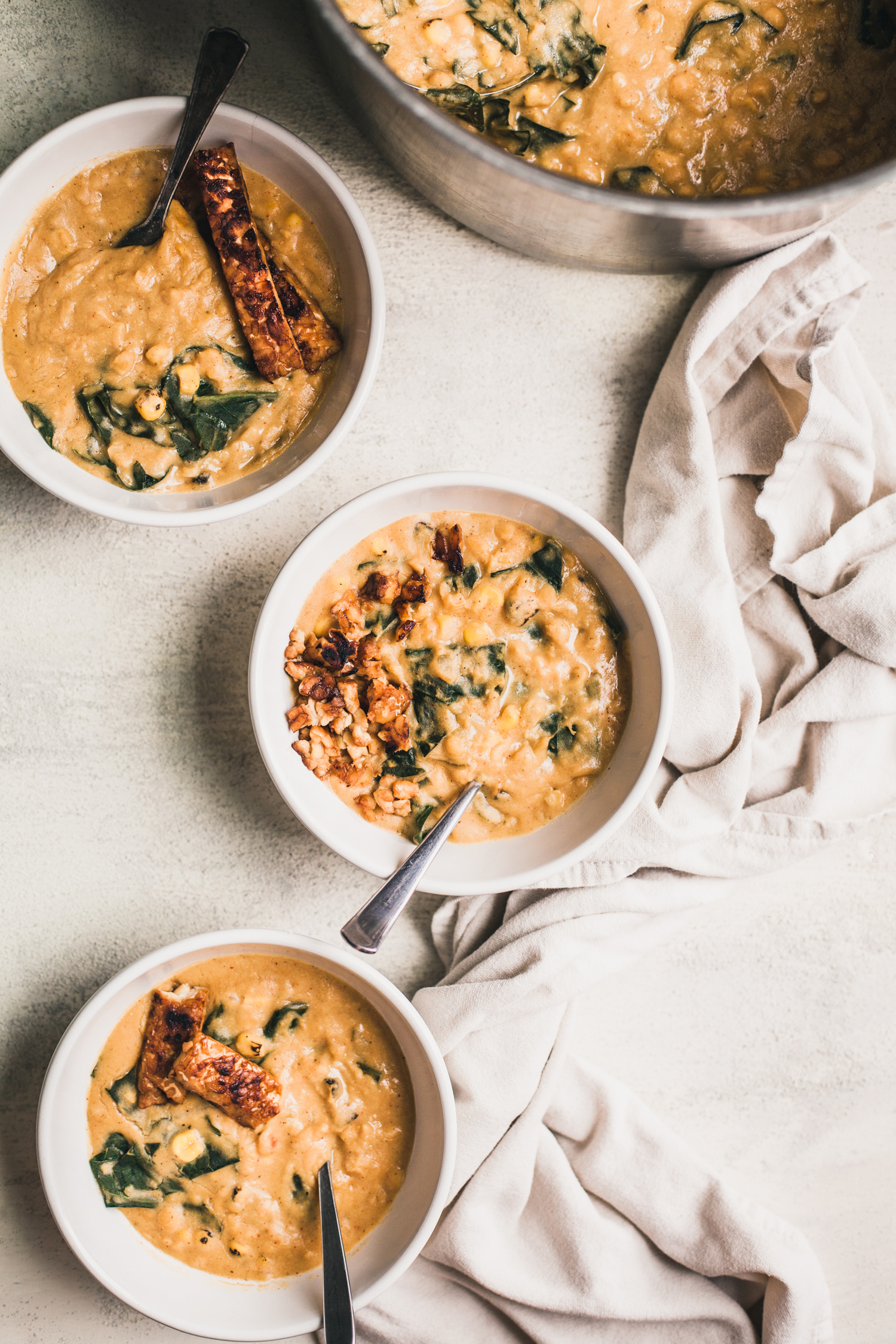 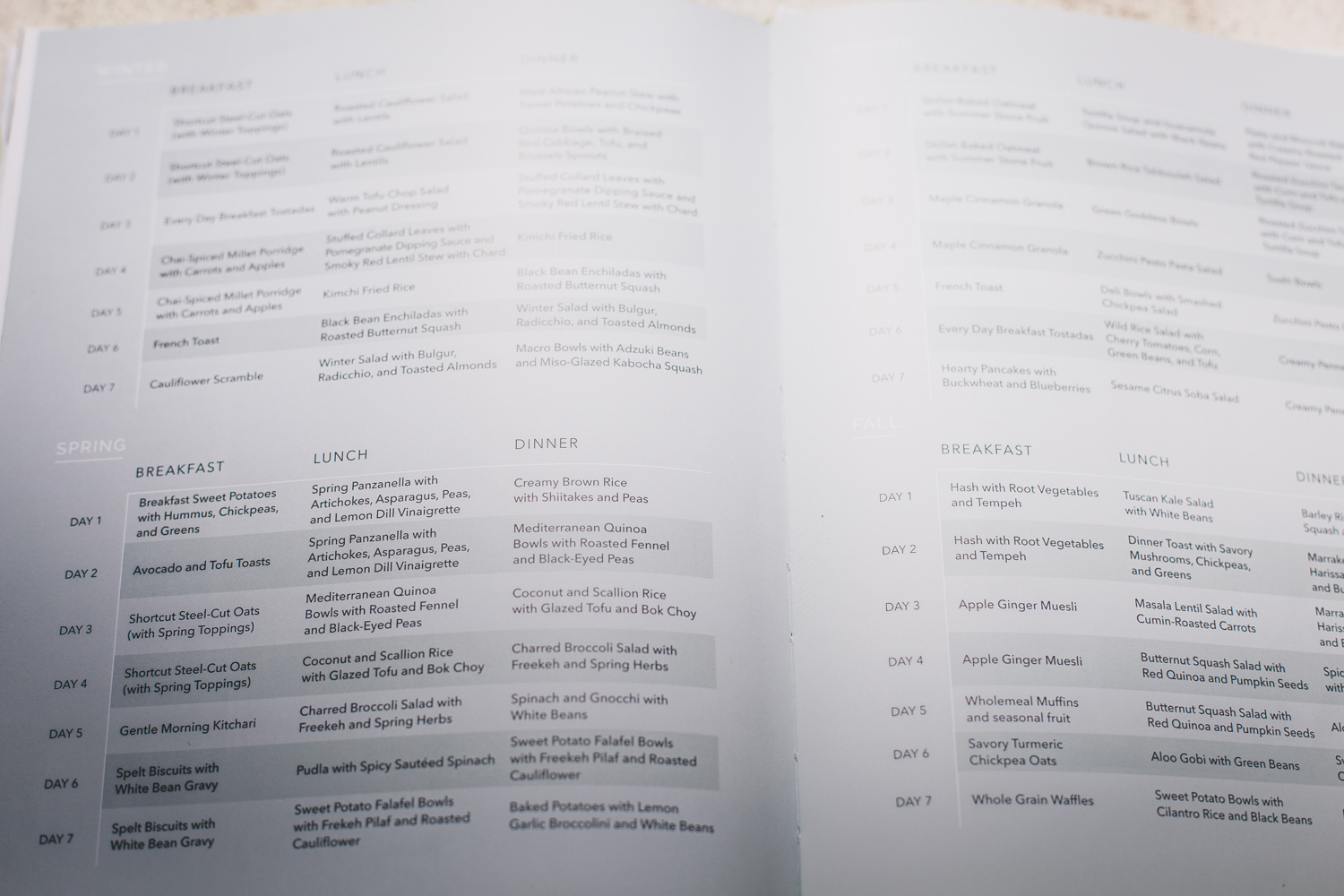 to make the cashew cream

Notes
A few personal adjustments that we made to the recipe:

We soaked the split peas overnight. We used fire-roasted frozen corn, because we saw it in the store and wanted to try it. It worked well here! Nice and smoky.
3.5.3226
Tempeh Bacon