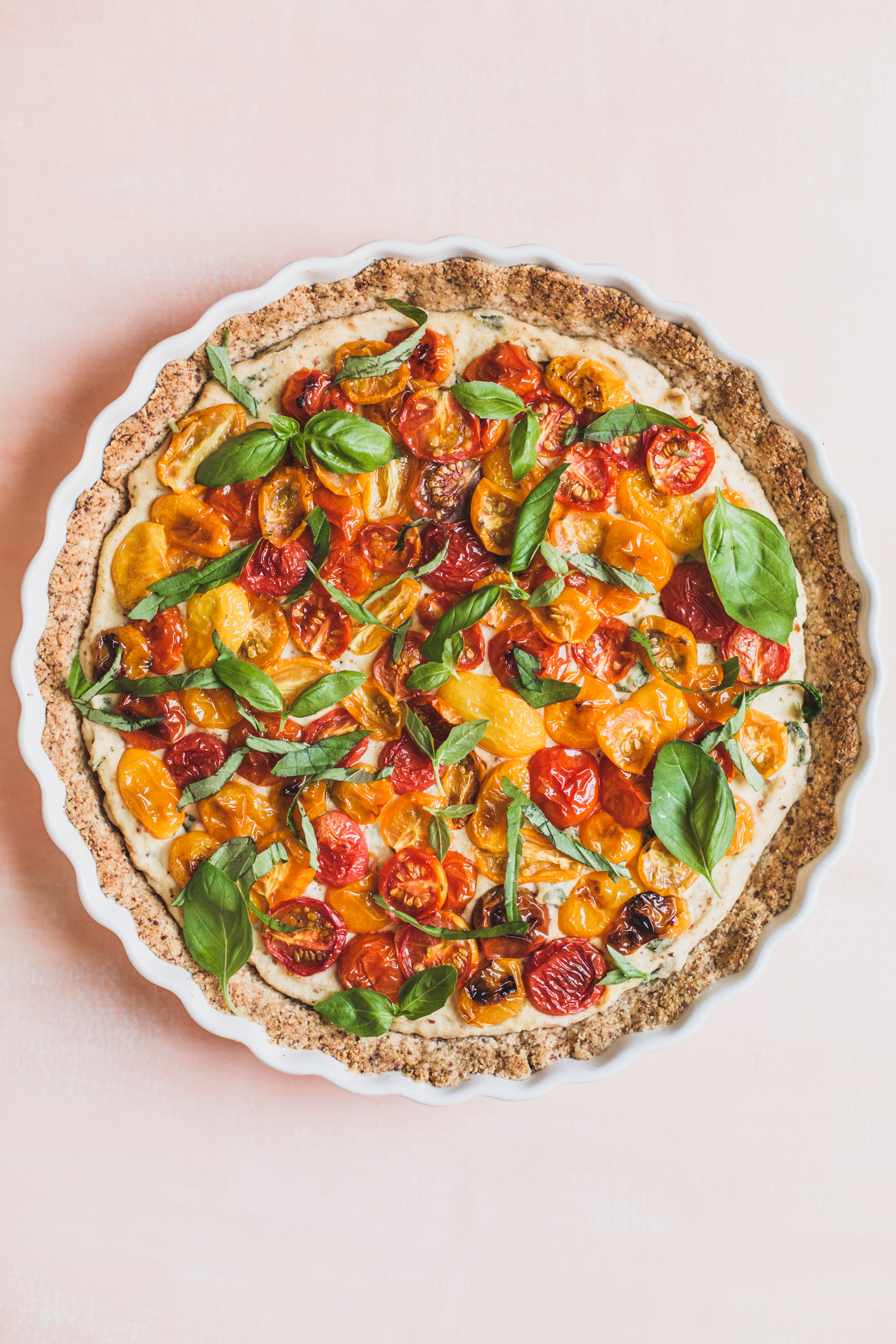 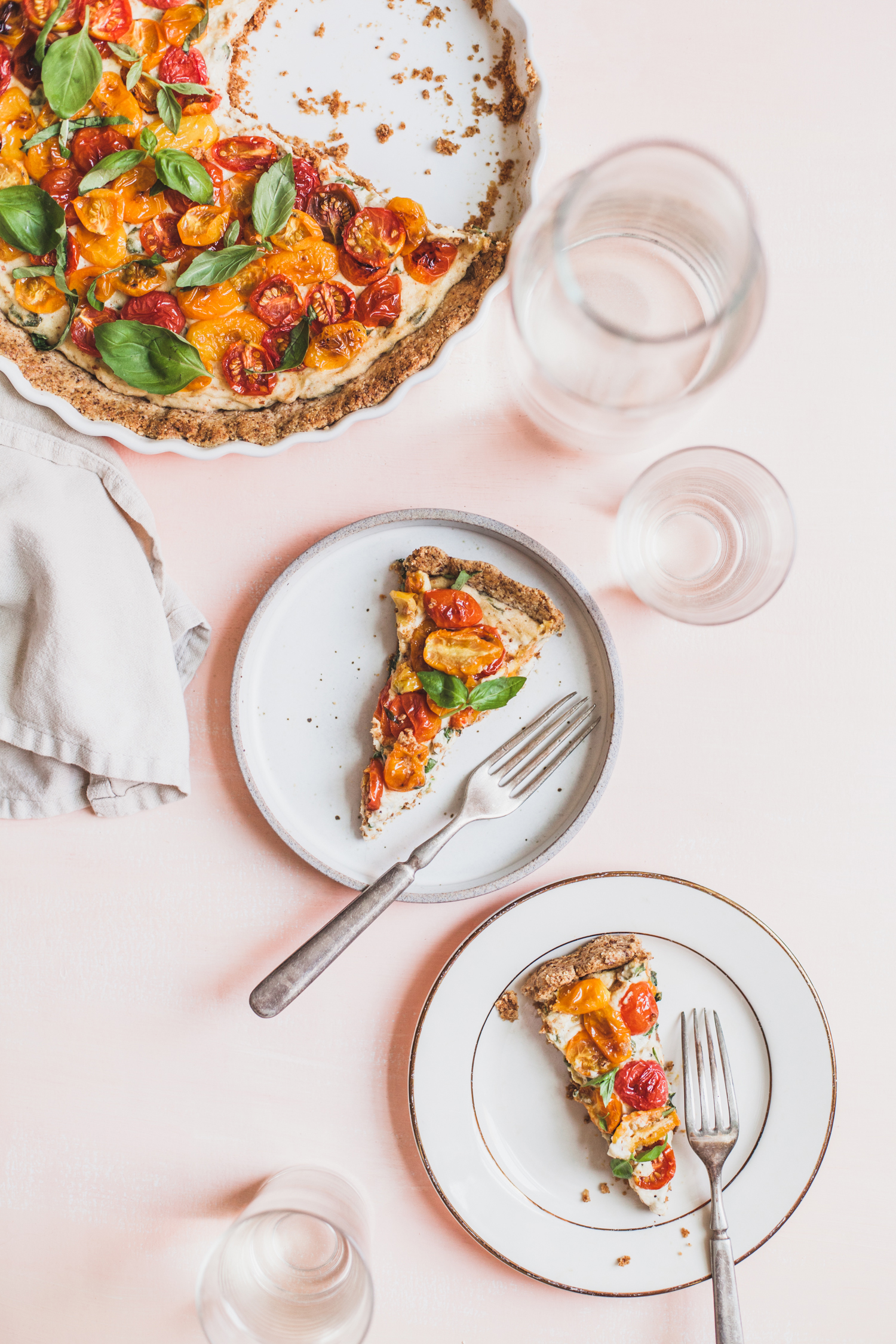 You guys, this tart! It’s one of our very favorite recipes that we’ve developed lately. Beaming with excitement to share it with you.
Our days have been full to the brim preparing for our retreat in Italy, planning a commissioned magazine shoot, and working on a new project that we are hoping to launch in November. It’s amazing to have our hands full with work that we’re in love with, but I would also be lying if I said that it’s all smooth sailing. Stress and overwhelm always find their way to creep in, and it’s been so important to employ our favorite self-love tools and practices to counteract stress and anxiety (much more on this in our upcoming new project!). Slowing down to cook a nourishing tart is definitely one of them.
We are genuinely grateful for summer produce right now, since it needs so little to taste delicious. A lot of it doesn’t even need to be cooked: just chop, season, and serve, which has all been so helpful during this busy time. This tart is not exactly in the chop, season, and serve category, as it requires a little more work and thought. It does, however, depend on the sweetness of late summer tomatoes and cauliflower, and it’s so worth the extra little bit of work than you might be used to during this abundant season. 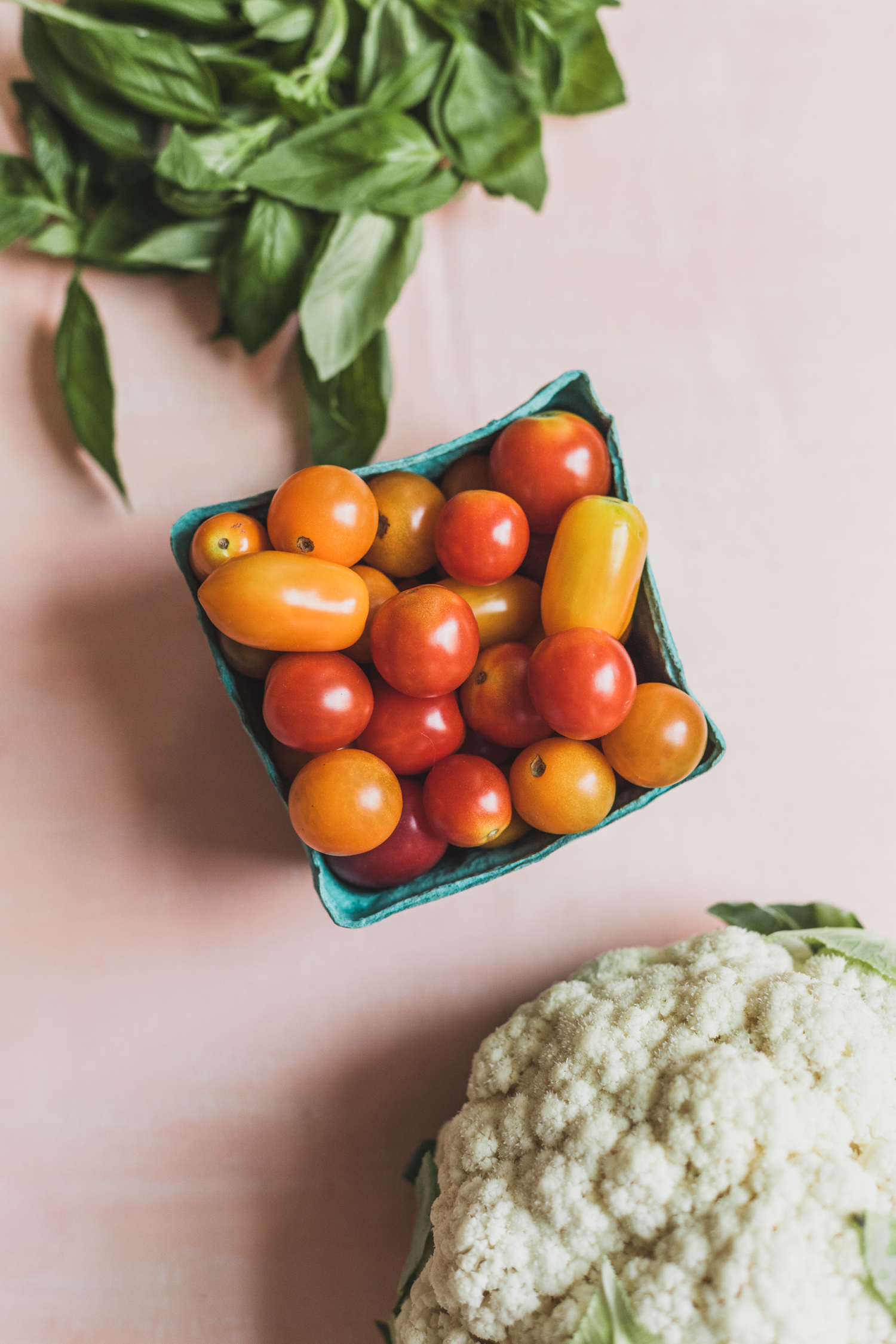 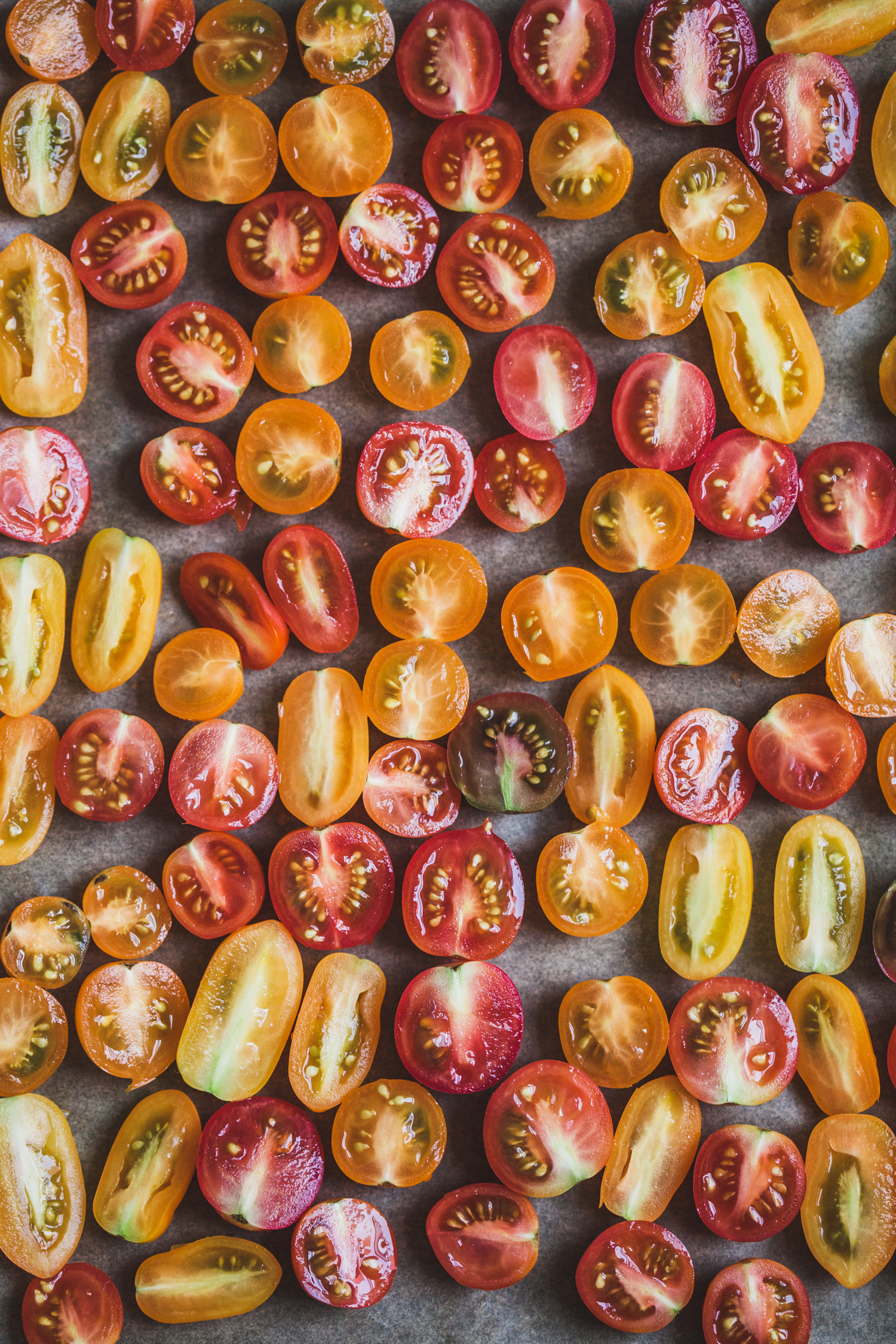 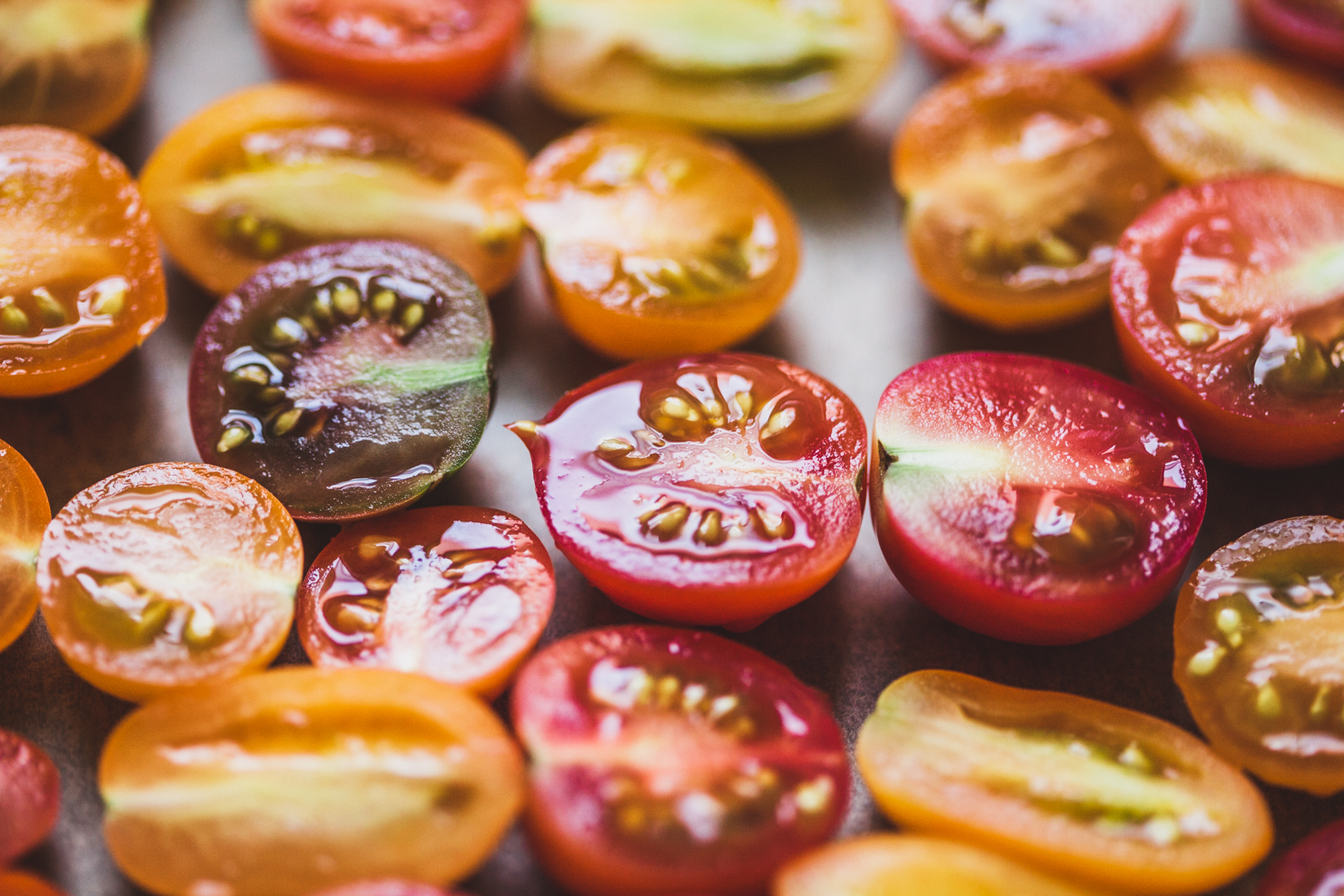 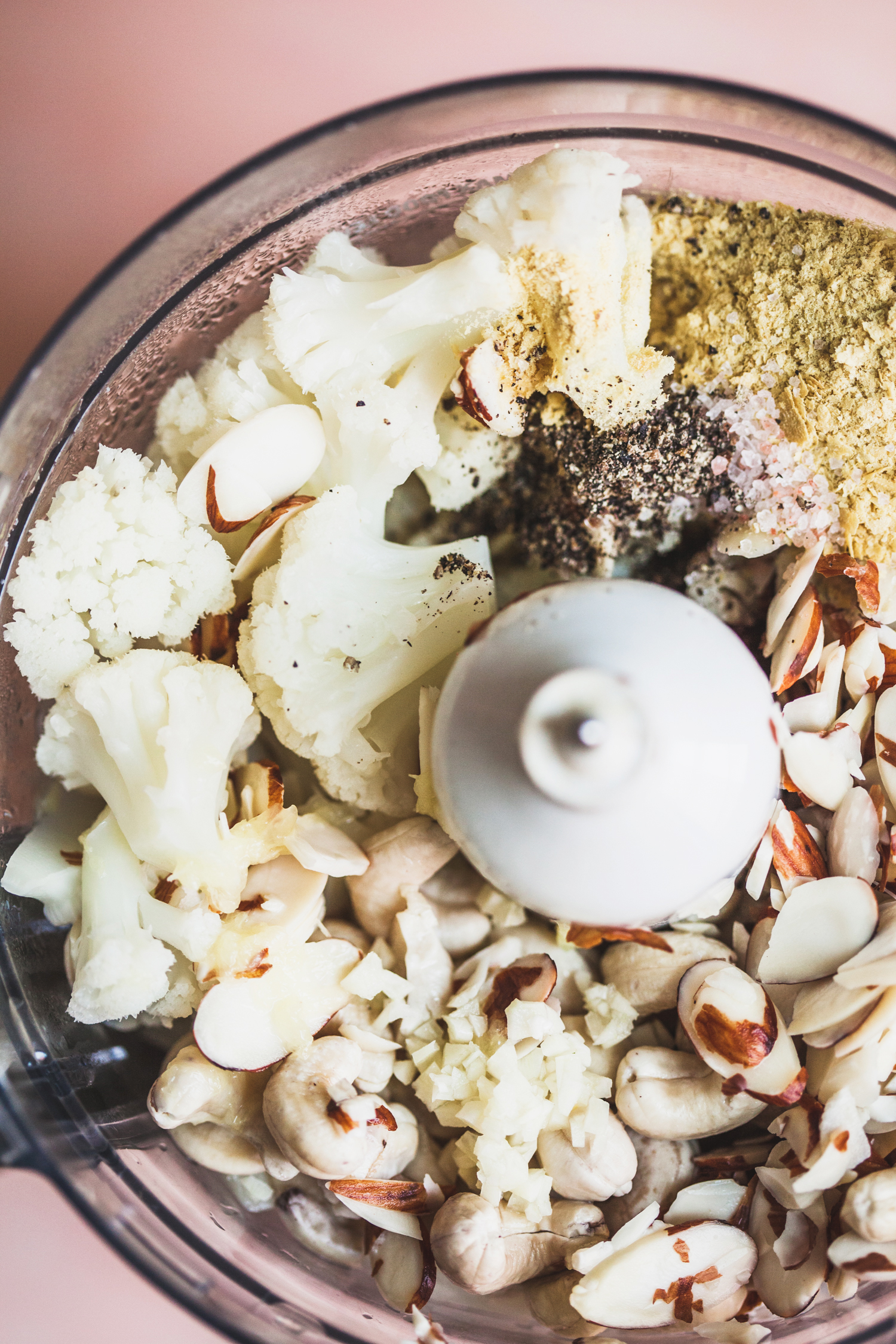 The tart consists of three elements that seem to have been made for one another: a 4-ingredient, grain-free crust, a savory cauliflower ricotta, and a layer of juicy, caramelized tomatoes on top.
I love making ‘ricotta’ with almonds or cashews, but thought that my usual recipe would be too heavy for this tart, since I needed a fairly good amount of it to fill up the whole crust. Cutting the nut ricotta with some steamed cauliflower worked amazingly well. If anything, the cauliflower contributed to the nutty and savory flavor of the cheese even further, while making the texture fluffy and light. It never hurts to add a dose of cruciferous veg to your meal, either ;) The richness of the ricotta is the best compliment to the sun-fed, juicy caramelized tomatoes that crown the tart. Add a (vegan) buttery crust to that, and you’re really in business.
Because this tart is plant-based and doesn’t contain eggs to thicken the ricotta, and because I didn’t want to over-complicate the recipe with any vegan thickeners, the ‘cheese’ is quite soft straight out of the oven. It’s still possible to get a nice slice though, if you work with a sharp knife and a dependable pie server. The ricotta layer does thicken up after a night in the fridge, so your leftovers will be even more sliceable. We hope you’ll give it a try! 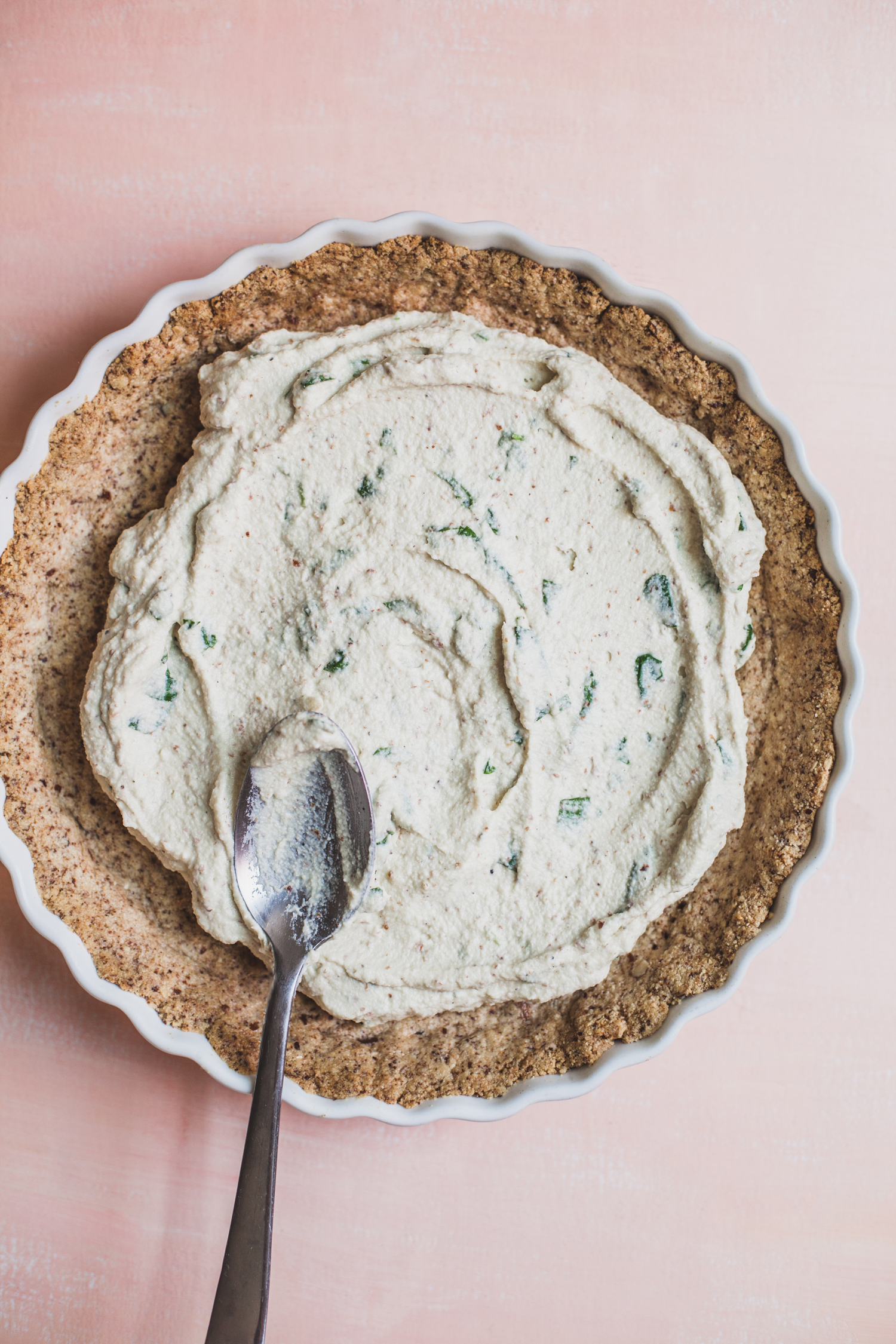 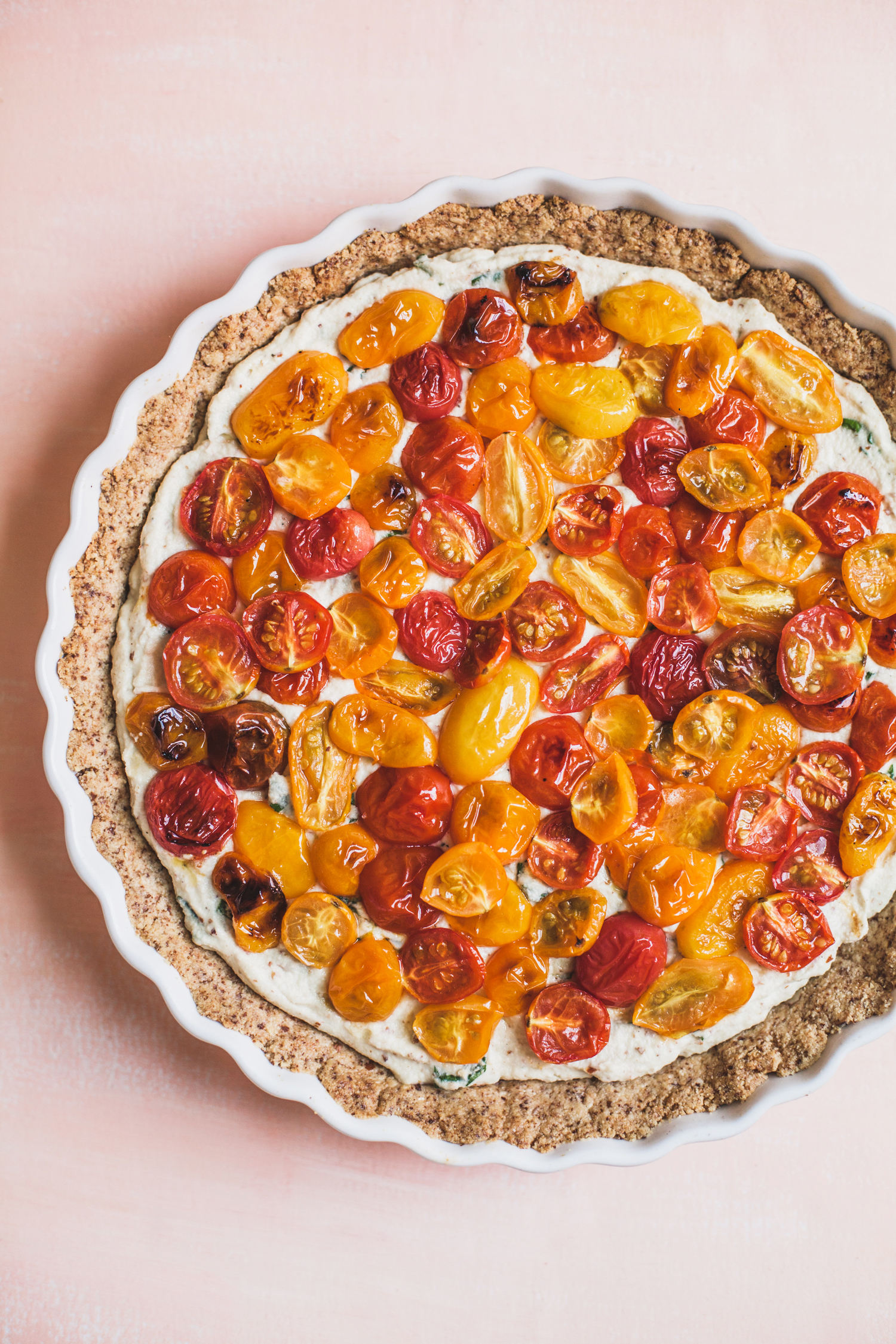 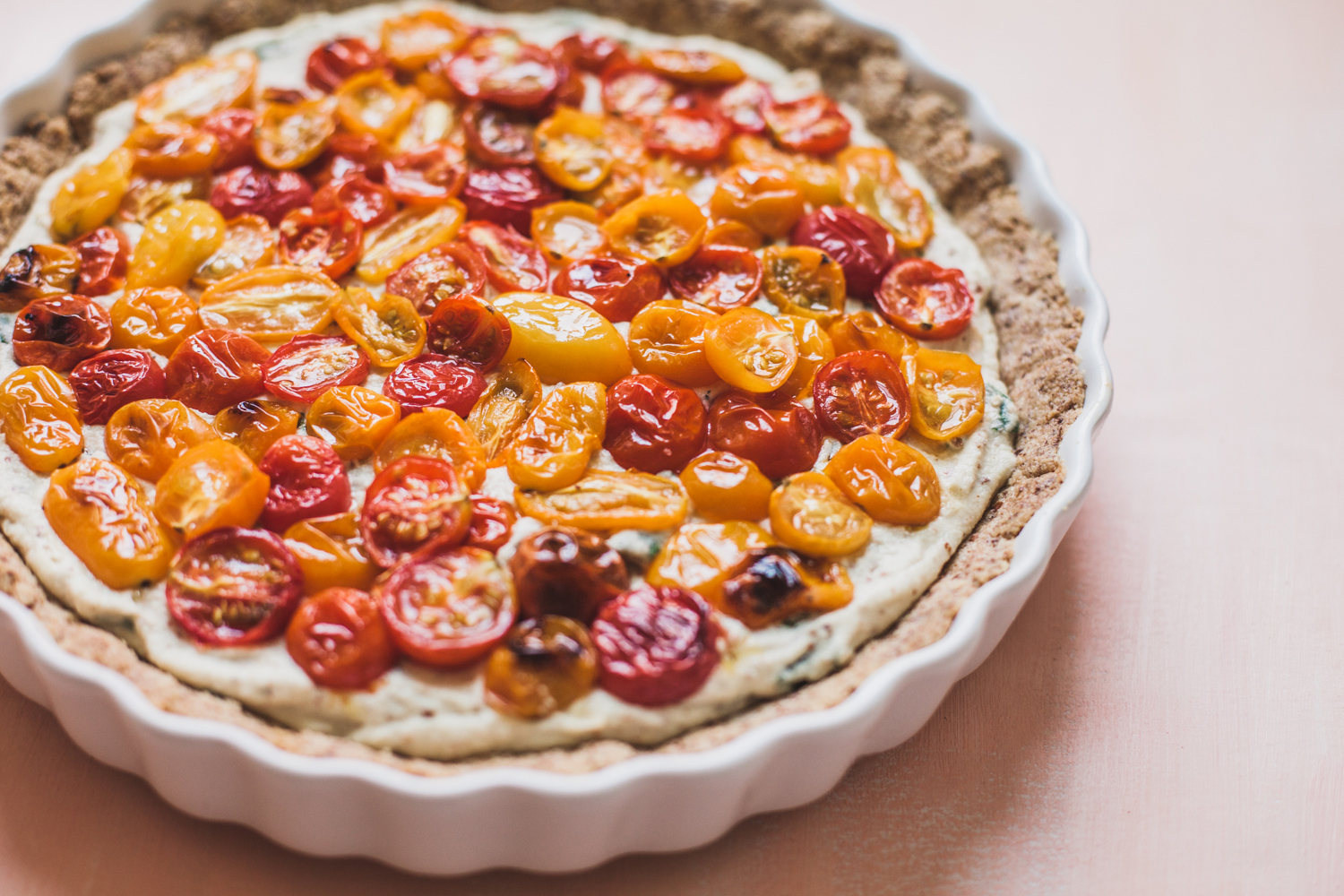 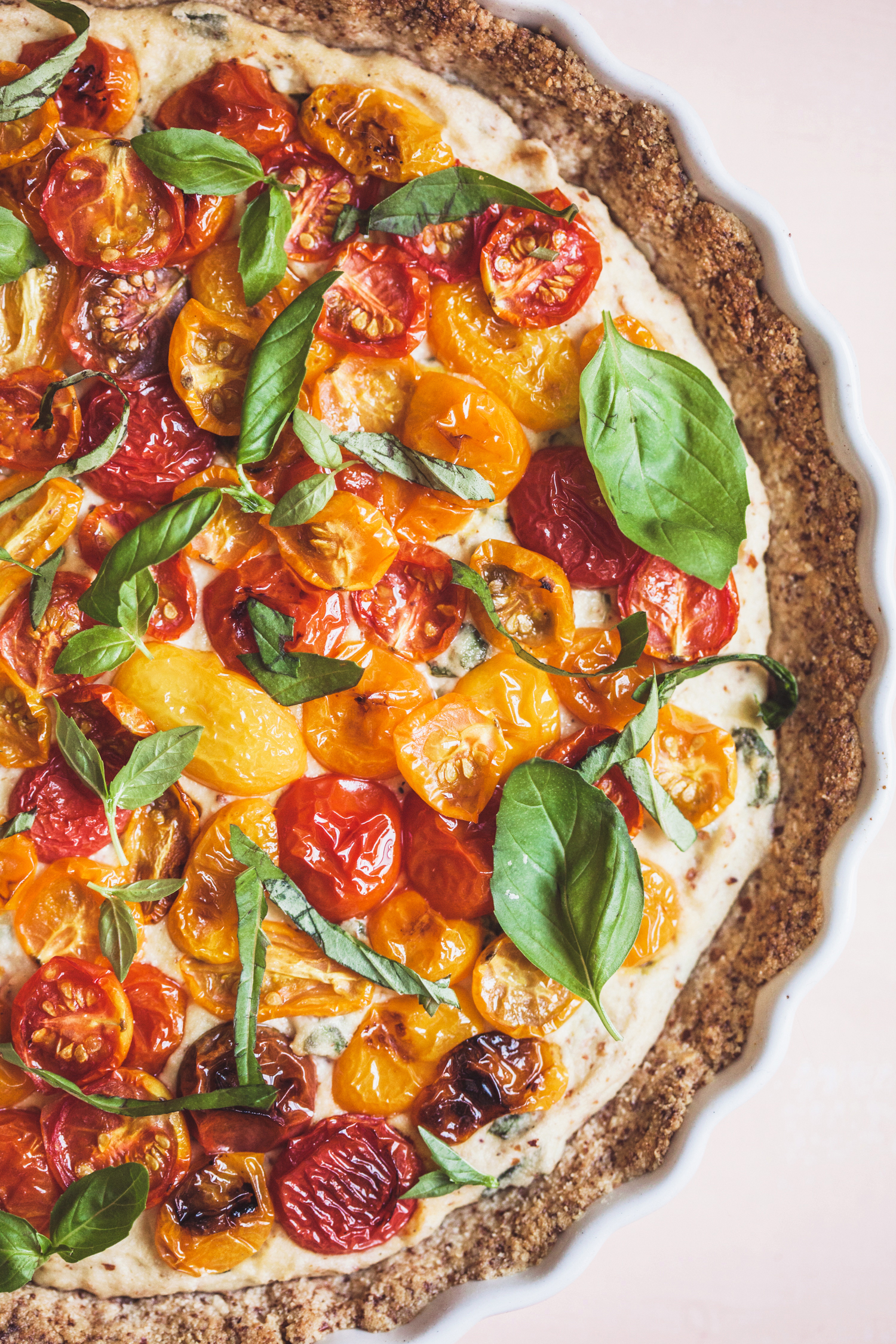 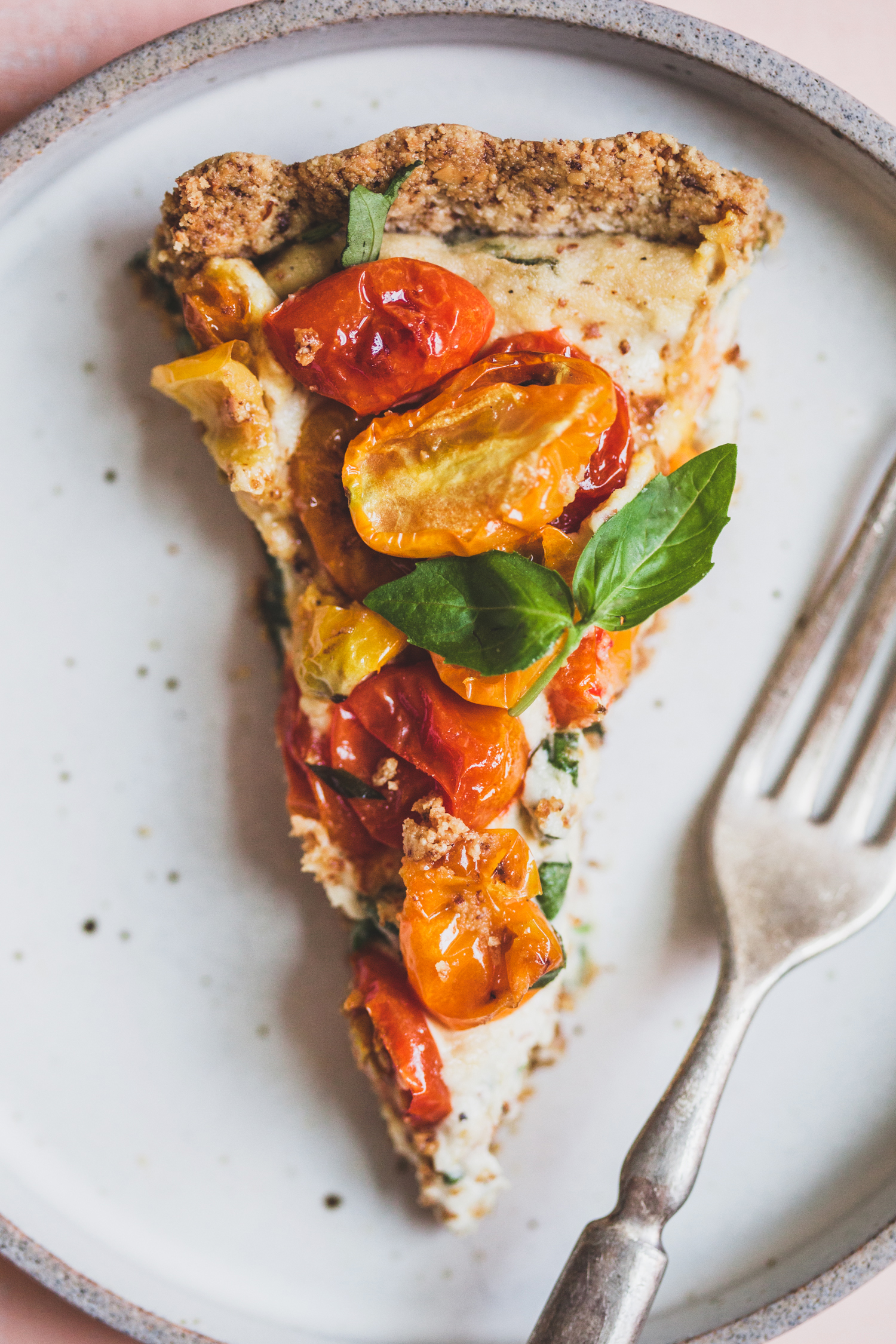 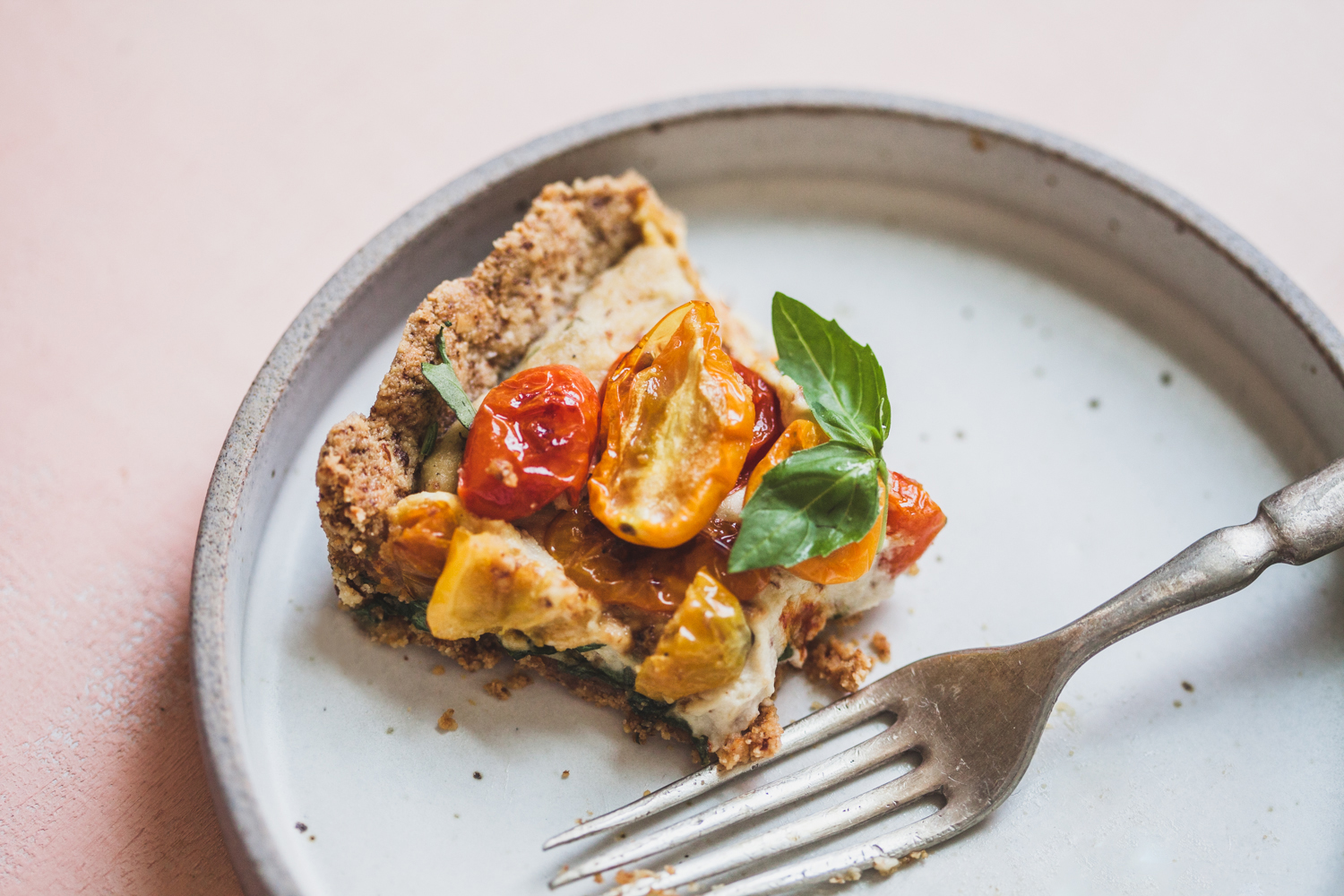 Print
Serves: one 10" tart
Ingredients
for the crust
for the cauliflower ricotta
to assemble the tart
Instructions
to make the crust

to make the cauliflower ricotta

to assemble and bake the tart