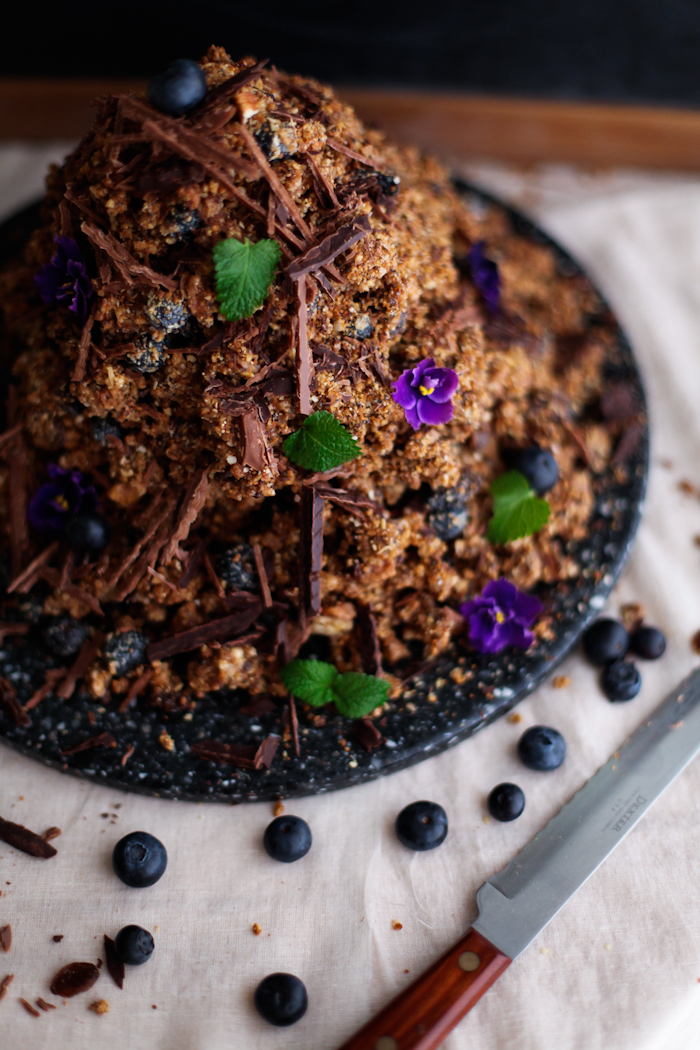 Here is a (lighter) version of a cake most Russian cooks have up their sleeve – Ant Hill – named for its appearance, fairly simple to make, and out of this world delicious. It is, hands down, one of my favourite desserts of all time. I couldn’t find any information on Ant Hill’s history, but it probably came about during the Soviet era of deficit, when few ingredients were available and people had to make do with what was on hand. To give you an idea, I’ll talk a bit about how it was traditionally prepared. The dough is a very simple shortbread, which is usually run through a meat grinder and then baked to make a worm-shaped sort of cookie. For the creme, a can of condensed milk is boiled in a pot of water, which adds a wonderful sweet depth to the already tasty condensed milk (but talk about BPA!) Mix that with loads of butter and you have your creme. The dough and creme are then mixed, formed into a hill, and refrigerated for a night, when the magic happens and all the flavours become incredibly friendly.
Some people add toasted walnuts, some – chocolate or raisins. A sprinkling of poppy seeds is often mandatory. Each family’s method varies a bit, but it’s an almost fool-proof recipe that requires very little. People are amazing at making something out of nothing during the roughest of times. 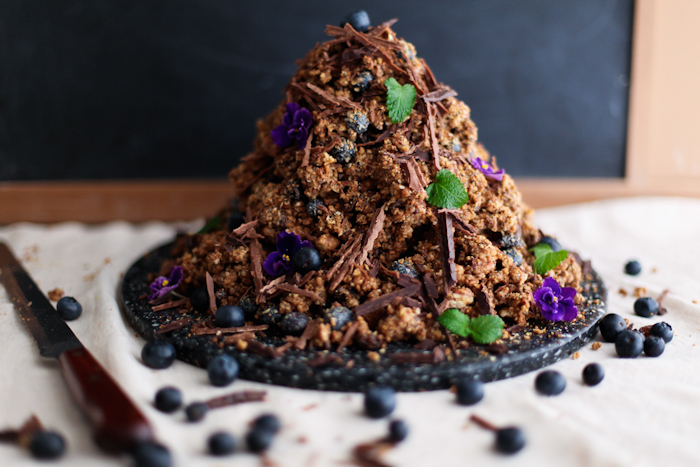 My recipe is of course a wide step away from the original. For one, it has no butter or condensed milk, the two main ingredients, it’s also vegan and gluten free. Still, I baked this cake out of nostalgia for the real Ant Hill, thinking of the many times I’ve made it, and the many birthdays I’ve celebrated with it on the table.
Aside from the raisins, chocolate, and poppy, the blueberries are a nice addition – small pockets of freshness among the richer, darker feel of the cake. The end result is remotely similar to the original, in taste that is, in appearance it is completely identical. It is much lighter – I didn’t want to take a nap after one slice – which is the general goal of my cooking nowadays. 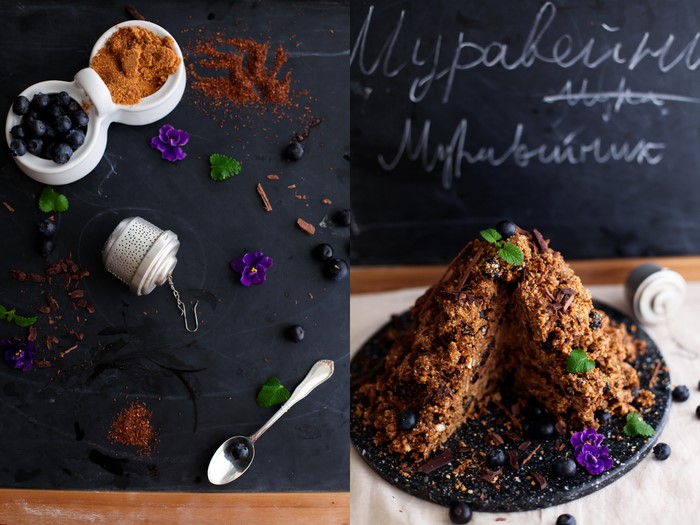 Preheat oven to 320F. Place all of the ingredients in a food processor and pulse until crumbly. Take care to not over blend. Place the mixture onto a parchment paper-covered baking tray and spread evenly. Bake for 15-20 minutes, mixing every 5-7 minutes and making sure that it’s baking evenly. Be careful not to burn the dough, as it’s easy to do. Once the crumbles are golden brown, remove from the oven and let cool.

In a high speed blender, combine everything but coconut oil until completely smooth. Add coconut oil at the end to incorporate.

In a large bowl, combine the dough crumbles, blueberries, raisins and chocolate pieces. Pour the caramel creme over, gently mix together. On a plate or stand, build the hill and sprinkle with poppy seeds. Optionally, decorate with chocolate shaves, lemon balm leaves, and flowers to create a forest look. Refrigerate for a couple hours or overnight, then slice like a regular cake and serve.